Help Rama Subbiah, a hard-working employee, get prosthetic hands for the limbs he lost in an accident | Milaap

You are sending a message to
Vishnu Lpati
Go back

Help Rama Subbiah, a hard-working employee, get prosthetic hands for the limbs he lost in an accident

Shares
Shares
Share on whatsapp
In an unfortunate incident on a rainy morning in July, Rama Subaiah got electrocuted on a live electric line. The dreadful result was that he lost both his hands. Rama Subaiah was an employee of the AP electricity department and was working as a lineman. There were heavy rains and he was on duty conducting repairs. Due to negligence of a fellow colleague, the mains were switched on and he suffered extremely severe burns.
Rama was rushed to St. John’s Hospital, Bengaluru the same night. He spent a harrowing 15 days in the ICU. There were a total of 6 amputative procedures conducted: 1 in the right hand and 6 in the left hand. All of them were completed by August 1. His blood group is A-, which was difficult to source because of the rarity. This further complicated the already dire situation. Later, he suffered from sepsis for which he was under anti-biotic treatment at the hospital. He spent a painful 1 month at the hospital. Even after that, he has been visiting the hospital every two weeks for post-op check up.


How Rama has managed treatment so far
All this while, Rama’s family had been running from post to pillar to borrow funds for the treatment. Rama’s colleagues from the Electricity Department contributed Rs. 2 lakhs towards the funds required during the initial treatment. By borrowing from friends and family and by exhausting all of their own savings, they managed to pay off the bills of Rs. 4.4 lakhs at St. John’s Hospital. There has been no confirmation of any reimbursements from the Southern Distribution Company of A.P. Limited yet.
Radhamma and Rama have two daughters, Likhita and Swapna, who are 5 years and 3 years old respectively. Their young daughters have not been able to come to terms with what their father has faced.  Radhamma is a homemaker and Rama is now out of work.
How can you help?
Without any hope for employment and without access to any more funds, Rama and his family are extremely distraught. He needs prosthetics for both his hands to reach any semblance of normalcy. Rama’s family had no other option but resort to crowdfunding to raise more money. The funds raised on Milaap will be utilized towards the purchase of and the procedure of fitment of bionic prosthetics.
Click here to contribute for Rama
Donate 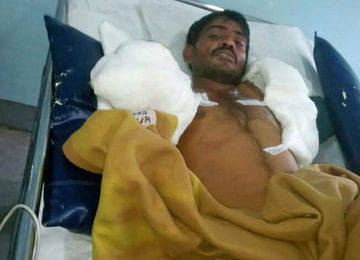 Help Rama get the prosthetics for his hands

Your contribute will fund purchase and fitment of Rama's prosthetics