This Retired Miner Is A Father Of 5, Who Might Succumb To Kidney Failure Without Your Help | Milaap
loans added to your basket
Total : 0
Pay Now

H
You are sending a message to
Harish
Go back

This Retired Miner Is A Father Of 5, Who Might Succumb To Kidney Failure Without Your Help

Shares
Shares
Share on whatsapp
For years, Raju worked as a miner, breathing in dirt all day long. While he toiled to raise 5 daughters, his body was getting damaged from exposure to all that dust and silica. Now, kidney failure has made life intolerable for Raju and his wife, Anjali. They borrowed lakhs of rupees for his treatment until people stopped helping. His family cannot put together even Rs 15,000 needed for essential pre-transplant procedures. He was making extra money as a cabbie, but now frequent dialysis has rendered him weak, and he cannot go to work. Raju's family needs desperate help saving him.

Raju with his wife Anjali (right) and daughter Asha

In an occupational setting, silica can be harmful when inhaled as a dust, particularly when such exposure is prolonged. Raju's past profession has now put his life in grave danger. His kidneys completely failed in December 2016. Since then he has been relying on regular dialysis. With passing time, his bodily functions suffer and he needs more frequent dialysis sessions. Last week, he woke up in the night with unbearable pain – and had to be rushed to the hospital for an emergency dialysis.
Now he needs dialysis thrice a week and the family cannot delay in fear of increasing his suffering. They live in Ramakrishnapuram, Telangana, and taking him to the nearest hospital in Karimnagar is expensive and distressing, especially when they have no source of income.
Ever since his kidneys have failed, Raju's body is slowly getting weaker

Raju used to work as a supervisor in the Singareni mines in Telangana. He took a loan of Rs 7 lakhs and now collection agents regularly harass them trying to collect the borrowed amount. Raju's son Venkatesh decided to take another loan to purchase a car and become a cab-driver, but that car was taken away too. Agents regularly come by making threats.
Venkatesh's livelihood snatched away, he now works as a private driver in Hyderabad. He sends some money back home, but it is barely enough when the family's medical bills and indebtedness have become such a burden. No one will lend them anything now – not even to save Raju.

The stress is sometimes too much for Raju's wife

The future looks so bleak that it has taken a toll on Raju's wife Anjali. She wanted to donate her own kidney but her kidneys have stones. She often walks off to the train station by herself, perhaps hoping to escape her situation. Asha, Raju's daughter is very worried that her mother will harm herself.
Meanwhile, Raju's health is failing fast. The family cannot keep up the treatment on their own for much longer. Raju is hoping that he gets a kidney at the soonest so he can go back to work and take care of at least some of the family's problems.

Raju's older daughters are married and stay away from the family. Only Asha is home with them, to help her mother take care of their father. Unable to find a job, Venkatesh has moved to Hyderabad. He needs to keep working to be able to at least buy food for his family back home.

The family is in a very difficult situation where they have nowhere to go. If Raju loses his life then only Venkatesh remains to pay back the loan. Help this family find some hope in a time when they have faced nothing but setbacks.

The specifics of this case have been verified by the medical team at the concerned hospital. For any clarification on the treatment or associated costs, contact the campaign organiser or the medical team.
Click here to save Raju and help this desperate family.
Donate 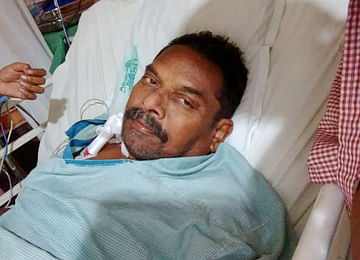 Help This Old Miner Get A New Kidney

The family is in a desperate situation. Help Raju and save his entire family that depends on him.