This 6-year-old Cancer Patient’s Father Is Forced To Leave Him Alone At The Hospital While He Begs For Money | Milaap
loans added to your basket
Total : 0
Pay Now

“Sometimes, I have to leave Pratham at the hospital with nobody but a nurse around. There is so much I have to do – get medicines, food and most importantly, beg people to help me fund his chemotherapy. Only I could accompany him to Bengaluru because he had to be admitted urgently. He cries for his mother regularly, but we are helpless.” - Srinath, 6-year-old Pratham’s father.

It all began when Pratham started running a high fever one day. 15 days passed, and no medicine was making him feel better. The village doctor suspected that it was typhoid at first, but later advised to do some tests. Pratham was then diagnosed with a severe form of blood cancer. Doctors warned that the cancer is rapidly advancing and he should start chemotherapy immediately.

“We could not understand how a child who had no history of serious illnesses in the past could get cancer. We were in no way prepared for this- mentally or financially. We didn’t wait for long- Pratham and I took the next train to Bengaluru from our village near Devanahalli in Karnataka. I didn’t want my son’s health to get worse. ” - Srinath

Sriram wants to be there for his son all the time, but sadly, he is always on the move to try and arrange funds for his treatment

Pratham’s mother could not accompany him to Bengaluru, leaving his father to fight alone

Pratham’s mother, Manasa, made the painful decision to stay behind as she had to take care of her 5-month-old daughter. Pratham could not understand why his mother was not accompanying him on the trip. His questions were met with either silence or tears.

“My wife wanted to come with us, but our infant daughter will catch infections at the hospital. Manasa knows that we cannot afford to rent a room to stay in Bengaluru. So she swallowed her grief and stayed behind. There is not one day where Pratham does not ask for his mother. He longs to be with her, especially when the nurses put the IV line on his arm and it hurts. I try to console him, but who can take the place of a mother?” - Sriram with tears in his eyes.

Pritham is confined to a hospital bed, with nobody to keep him company but he does not complain

Back in the village, Pritham loved playing cricket with sticks and a ball. Today, all he can do is watch cartoons and draw. Sadly, the child is getting accustomed to the hospital environment along with his loneliness.

“I have explained to Pratham that his body is attacking him. But he didn’t seem to mind. In fact, he was amused by the hospital environment. The side-effects of chemotherapy have not set in as such. He likes the coolness that the AC brings, because we don’t have one at home. He is cheerful around doctors and nurses. When I leave him alone to tend to himself, I feel guilty but do I have a choice?” - Sriram, Pritham’s father.

Pritham has to undergo intensive cycles of chemotherapy, otherwise his blood cancer will turn fatal. His father, Sriram, used to have a small rented grocery store and earned around Rs 7,000 a month that was barely enough to meet the needs of his whole family. He had to borrow money from people in the village to come to Bengaluru for Pritham’s treatment.

“People in the village were not very supportive. They think that just because Pritham doesn’t look unwell, he may not have a serious disease. I had to struggle a lot to arrange Rs 3 lakhs. But I need Rs 14 lakhs for his treatment. I am trying to beg everybody I know to help me. I have applied for CM’s fund but I don’t know how long it will take. My son does not have much time.” - Sriram

Your contribution can ensure that this father gets his son treated at the earliest. 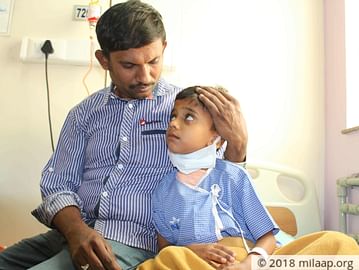 UPI: givetosrinath@yesbankltd (Copy to clipboard)
Or
Click here to read the instructions before you make a bank transfer.