Shares
Shares
Share on whatsapp
Milaap borrower Taheran Laskar leads a group of village women living in rural West Bengal who have borrowed Milaap loans for solar lamps.Their livelihoods range from wallet making to tailoring and juri work.
Taheran was not present for an interview when I visited her borrowing group during their group meeting on 26th February. However, I was able to get an interesting story from another member of the group, Manoyara Laskar.
Manoyara has been a seller of adhesive material for wallet manufacturing for the past 8 years. She also assists her husband in his grocery store, where she sells the adhesive materials. They have 3 sons, all of whom are studying at school, although the eldest one sometimes runs the grocery store, when both of his parents are absent.
Manoyara has purchased 2 solar lamps with a Rs. 3488 loan that she borrowed from Milaap. One lamp is allocated for her husband’s grocery store, while the other is used in her home. The lamp in the grocery store has enabled Manoyara and her husband to sell their goods after sunset, whether adhesive materials or food produce, uninterrupted, providing bright light during the daily 1 to 2-hour long power cuts. At home, their sons are able to properly study in the evening under her other lamp, during daily power cuts.
Manoyara is particularly happy about the benefits that both the solar lamps have brought to her and her family’s lives. This is because they faced several issues when power cuts occurred at both at the grocery store and home.  Manoyara and her husband’s selling activities would be drastically curtailed; and their children were unable to properly study. Both places then had to be lit by kerosene lamps, which served as a substitute source of lighting during power cuts. However, these lamps would damage the health of the whole family. They all suffered from respiratory illnesses caused by the toxic fumes from the lamps’ burning kerosene oil. Over that, the fumes from the lamps would stain the walls of both the grocery store and their home with soot. Despite the power cuts, Manoyara and her husband would sometimes not even use the kerosene lamp in the grocery store, fearing that the store would catch fire. They also occasionally forbade their children from studying under their other kerosene lamp, fearing that their children’s hands would get burnt. 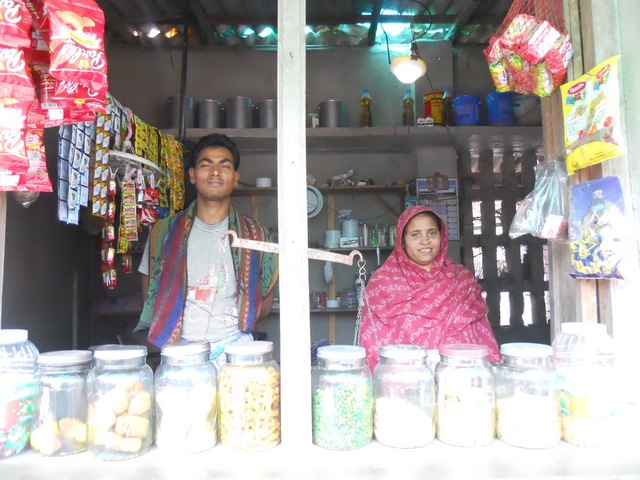 “Power cuts used to hamper our business before we bought a solar lamp” - Manoyara
But for Manoyara, those problems are now in the past. The benefits of her 2 solar lamps have enabled her adhesive material sales to improve greatly. Her average monthly income has now increased by Rs.200, from Rs.8000 to Rs.10,000 – a huge deal for her.
NOTE: Manoyara has so far repaid Rs. 1728 of her Rs. 3488 loan, through weekly installments of Rs. 80 (Rs. 40 for each lamp). The loan is meant to be paid off in 44 weeks from the date of its disbursal (18th Sep, 2013); in other words, circa 1st Aug, 2014.