Painter Spends Every Rupee He Has But It’s Not Enough To Save His 3-year-old Son From Taking His Last Breath | Milaap
loans added to your basket
Total : 0
Pay Now

HK
You are sending a message to
Hima Kunnelparambil
Go back

“All of a sudden, white bubbly liquid started pouring out of Nived's mouth. His body was shaking. Our son was having a seizure. The doctor told us that he should be taken to a private super-specialty hospital soon or he would die. I only had Rs. 500 in my pocket as I had just started painting number plates for vehicles. But I was determined to save my son at any cost.”-  Libikumar, father of 3-year-old Nived Krishna

Nived was enjoying Malayali New Year with his family, when he unexpectedly got sick

On the auspicious day of Vishu, Nived, his father, Libikumar and mother, Haritha were spending quality time with extended family at their home in North Paravur, Kerala. Little Nived started feeling weak suddenly and developed a fever. His body was burning hot. They rushed him to a medical centre nearby. While the doctor was prescribing medicines, Nived started getting fits.

“We did not have any time to think. Everything happened so fast. Our child’s body began moving vigorously. Soon, his eyes rolled up and he was unconscious. He had to be rushed to an expensive private hospital in Ernakulam because no other hospital in our area had an emergency section for seizures. I knew I would not be able to afford even the consultation with Rs. 500 in my pocket, but only they had the facilities we needed to save our son.” - Libikumar

Libikumar and Haritha can hardly recognize Nived now. Their toddler has a dozen tubes running through his face. He is weak and motionless. The fits attack had almost killed him.

“He did not open his eyes for a week when he was in the ICU. His breathing capacity completely collapsed after the fits attack. The doctors even had to operate on his windpipe to create proper airway. If not for the machines that were helping him breathe, we would have lost him a long time ago.”- Haritha, Nived’s mother

Nived's parents took good care of him. This family was happy before tragedy struck them

Nived was never an active baby, but he hadn’t exhibited any serious problems since birth. It bothered his parents that even after having turned 2, he hadn’t spoken his first word or taken his first step. He was taken to many doctors, who suggested physiotherapy and speech therapy. But only after the fits episode did Libikumar and Haritha come to know that Nived had severe growth disabilities because of a severe neurological disorder.


“Nived’s legs were not strong enough to walk at first but physio really helped him. He was trying to let go of the baby walker and trying to walk on his own. Same with speech therapy – he was saying Acha (father) and Achacha (grandfather) in bits and pieces. I thought my baby was going to grow up fine. Now our lives will never be the same again.” - Libikumar

Nived may not be the perfect baby anymore, but his parents want to save him because he is ‘God’s gift’

The doctors have told Libikumar and Haritha that Nived may be lacking on all developmental fronts even if he gets his life back. But they are not worried about all that – they only have one concern. They want to save his life.

“Our son is our life. He may not be ‘normal’ like other children anymore. We may have to beg. We may have to borrow. But we are willing to do anything for him. From the moment he entered this world, we have loved him, along with his imperfections. Nothing will change that ever. If I were rich, this wouldn’t have ever been an issue. I would have given away everything to save Nived. Money is my only tension.“ - Libikumar

Libikumar had been saving some money over the years to invest in his small number plate painting shop. But before it could take off, his son Nived fell critically ill. He was forced to use all that money for his son’s treatment. Sadly for Libikumar, that amount is not enough to save his son’s life.

“I have used up close to Rs 50,000 that I had. I had to borrow another 50,000 from relatives. Even if Nived gets discharged from the hospital, the doctors have told me that he would require advanced care. We may need to set up a ventilator at home. His breathing is getting worse by the minute. I need help or my son will stop breathing forever.” - Libikumar, with tears in his eyes.

Your kindness can help this father save his son from death. 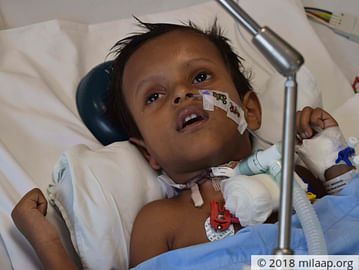 Nived's parents want to bring back son from the verge of death, but they have no money.