For This 17-Year-Old Student, An Immediate Surgery Is His Only Chance To Beat Cancer | Milaap
loans added to your basket
Total : 0
Pay Now

For This 17-Year-Old Student, An Immediate Surgery Is His Only Chance To Beat Cancer

“I never thought that my son, Vaseem's ability to read would bring him so much sadness. I never wanted him to know that he has cancer, but sadly he can read reports. Knowing he has a deadly disease has left him numb. He has always been the closest to me. Whenever in pain, I was the first one he would reach out to, but this time even I am incapable of taking away his pain,” Kausar, Vaseem’s mother.

17-year-old Vaseem was buckling up to go to college soon. His father, Zubair was even working extra hours to pay his college fees. Vaseem was planning to take up part-time jobs so that he could support his family, but now he can’t even get out of his bed. While all his friends have started going to college, all he can do is silently cry to himself

“My son used to be so active. He was the kind of child one prays to Allah for. He loved going out and playing. Books were his best friends. Cancer has made him so tired that he can barely read for even an hour.”

After completing his higher secondary exams, Vaseem suddenly started complaining of severe leg pain. The parents thought that he must have fallen down while playing and took him for an X-ray. The reports didn’t indicate an injury. Kausar and Zubair were shattered to know that their child has osteosarcoma, a severe form of bone cancer.

“We had tried to hide it for days. Our silence and tears gave him a hint that something was wrong. It was difficult for us to go to the hospital in case of an emergency. Hence, we decided him to send him to my brother’s place at Shimoga, which is 4 kms away from the hospital. We have never let our kids away from our sight for a single day. Vaseem instantly knew something was wrong.”

Vaseem’s twin brother, Fahim has already started working in a small garage so that he can save his brother. Fahim is in the village and has to travel 15 kms to see his brother. He saves up money to see Vaseem. He loved playing football so much but he can't so that anymore; all he’s worried about is saving his brother.

“We can’t even keep Vaseem with us. We travel 30 km every day to see him. It scares me to see my child so quiet. He is in too much pain and constantly asks me what he did to deserve this. It’s very painful for a mother to see her teenage, healthy boy suffer like this.”

Zubair works as a vendor and somehow manages to earn Rs 200 per day. Although they could never afford luxury, Zubair’s family never complained of anything. He never thought that his son who had a bright future would be battling for his life against cancer. Although spending a few lakhs is simply out of his reach, he is not ready to let cancer take his son away.

Your support can help this teenager see a bright future again 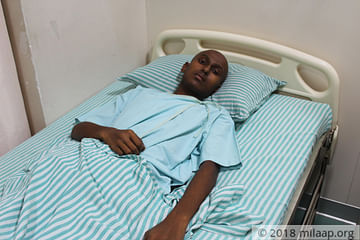 Vaseem Will Die In Pain Without An Urgent Surgery

Vaseem can no longer walk much. He can see his future dying out and is suffering in silence.