If There Was One Chance To Save Your Child, Would You Take It Or Let Him Die? | Milaap
loans added to your basket
Total : 0
Pay Now

DN
You are sending a message to
Dr. Neeraj
Go back

If There Was One Chance To Save Your Child, Would You Take It Or Let Him Die?

"Family, friends, and even doctors said that it is best to let him go. They reason that his chances of survival are low. We may lose him in a few months. Even if he survives, we have to take care of him like a baby all life. I ask, would you let your child die if he is sick, or do everything possible to save him?" - Kulveer Singh Sidhu (father)

Does Down Syndrome mean he doesn't deserve to live?

Mehtab is 2 years old. He was born with Down Syndrome. People often tell the family to put Mehtab in a home for special kids. They believe that his disease is for the rich people, and as a farmer, Kulveer should not have to deal with it.

"Mehtab kept falling sick. Sometimes cold, cough, fever. Sometimes, he would struggle to breathe. Every time we had to run to the doctor. In Tharajwala (village in Punjab), nobody helped. In Chandigarh, they told us to come back in 6 months. In Ludhiana, they told us to pay 10 lakhs. When it seemed like Mehtab would not live that long, I came to Delhi. I got to know that he has two big holes in his heart." - Kulveer

His heart cannot beat for long

Mehtab's heart is not strong enough. With the two holes, his blood mixes. His body and brain do not get enough oxygen. As a result, he is not able to grow. He is weak all the time, and has to be carried. He coughs so much that he vomits. His heart and lungs are under so much pressure to work harder, that his chest protrudes out. At this rate, Kulveer may lose him soon.

"Mehtab is closer to his father. Only my husband can make him feel better. They go to the Gurudwara together. They believe so much in Guru. My son's first word was 'Wahe'. At least for this I hope that God saves him. Even if nobody is willing to help us, I hope God sends us a miracle" - Ramandeep Kaur Siddhu (Mother)

Ramandeep struggles to feed Mehtab, as he chokes on even a drop of milk. Unable to stop her son from crying and falling unconscious, Ramandeep screams for God's help throughout the day. Her cries echo through the house.

Would you help Mehtab survive?

Every day and night, Kulveer has to toil in the fields to get as much as Rs. 400. He brought his son to Delhi on a loan. He struggled for a year to make this trip. Thankfully, he heard that Mehtab can survive. He needs surgery to close the holes. This surgery will cost him Rs. 4 lakhs.

"I'll do anything for my son. God gave him to me as a gift. I promised to take care of him. But I don't know how I will get 4 lakhs. People we know refuse to help us." - Kulveer

Mehtab's disease is weakening him every day. The family has no money to stay at the hospital anymore. They need your help to ensure that their little boy comes home alive. 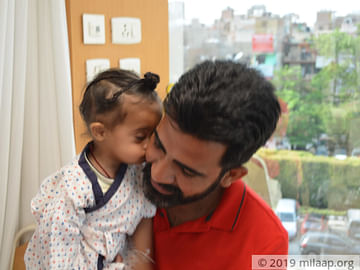 Does Down Syndrome Mean My Son Doesn't Deserve To Live?

Mehtab was born with Down Syndrome and a heart disease. This family is doing everything they can...

UPI: givetokulveer1@yesbankltd (Copy to clipboard)
Or
Click here to read the instructions before you make a bank transfer.