1-year-old Vignesh Has Been Suffering From Severe Vomiting And Diarrhea Since Birth | Milaap
loans added to your basket
Total : 0
Pay Now

SS
You are sending a message to
Santosh Singh
Go back

Shares
Shares
Share on whatsapp
Vignesh’s inability to retain any food in his body since birth has left him very weak. Vignesh has fought hard for the past year and been admitted in the hospital many times. To recover (or continue to live), he needs an intestinal transplant. His parents have expended all their financial resources and have even borrowed money to keep his treatment going. Now, their poverty makes it difficult for them to maintain his health and provide for the transplant.

Vignesh has had diarrhea all his life

Kalpana, Vignesh’s mother, says, "He has been sick since he was just 15 days old. After that, his loose-motions began. It has not stopped since then. Anything we feed him is either vomited out or passed out in stools. For months, we have heard doctors tell us that we should give up. We know there is a cure, and my son deserves it.”

It took the doctors over a year to figure out what was wrong with Vignesh. After several visits, Vignesh was diagnosed with Intestinal Lymphangiectasia which is a rare intestinal disorder. Due to this, Vignesh has had constant diarrhea and this has taken a severe toll on his health and growth. His physical weakness has prevented him from growing up like a normal child and he still hasn’t been able to find the strength to walk.
Even after the diagnosis, it took his parents 4 months to find a doctor who told them he could perform a surgery that could cure the baby. After all the illness and suffering, there is finally some hope for Vignesh to have a normal childhood.

Vignesh and his father, Roshan, in the background

Vignesh’s constant bad health means he needs to be admitted into a hospital several times. His parents need to arrange Rs 40,000-50,000 for transfusions and for feeding him through tubes every time. Roshan, Vignesh’s father, is an auto-driver and earns around Rs 8,000-9,000 per month, and Kalpana is a housewife. Kalpana made sure Vignesh always had the medical attention he needed and asked everyone in her community to help. Her sincere desire to save her son is what has kept Vignesh alive.

“We used up everything for Vignesh's treatment. All our savings, both our parents' savings and all my wedding gifts are gone. As his parents, we have to do everything we can. I told my husband – no matter what we will save him. It is what he deserves after so much pain,” Kalpana stated valiantly.

Facing financial pressures, they have still been able to provide Rs 9 lakhs to keep Vignesh alive over the past 18 months. Vignesh had to be hospitalized for months – sometimes in the Intensive Care Unit too.

Despite the doctor willing to subsidize treatment costs, Roshan and Kalpana are still unable to afford the surgery that Vignesh needs.

A lawyer, Santosh Singh, has been helping Kalpana to apply for various schemes and grants that could possibly help her. He said, “It is very difficult for them because they are illiterate and don't know what they should do or who they should talk to. So, I felt that I should step in and help out because the mother is really working very hard to save her child.”

With her determination, Kalpana has moved big obstacles and has finally found a way to give her son the healthy childhood he deserves. With your help, she can make the most of this opportunity and actually save him.


Vignesh and his family

After several months of discomfort and illness, Vignesh needs immediate medical attention to survive a rare intestinal disorder. His parents have no means to pay for his treatments and needs. Your contribution will be used to continue his medical treatments, and provide for the surgery he needs to recover from this grave disorder.

With your help, Kalpana’s dreams would come true and Vignesh can finally have a healthy future and a childhood.

The specifics of this case have been verified by the medical team at the concerned hospital. For any clarification on the treatment or associated costs, contact the campaign organizer or the medical team.
Click here to contribute and help Kalpana save her son.
Donate 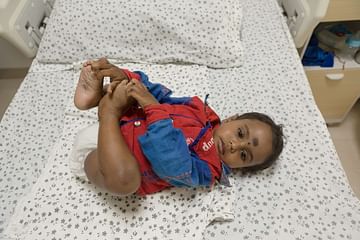 Save Baby Vignesh From A Fatal Intestinal Disease

Vignesh has a rare disease that does not allow him to retain food. You can help save him.

UPI: givetomlpvignesh5@yesbankltd (Copy to clipboard)
Click here to read the instructions before you make a bank transfer.