It Is Not Sweet 16 For This Boy Who Is Losing His Liver And Kidneys To Bird's disease | Milaap
loans added to your basket
Total : 0
Pay Now

"He was supposed to write his board examinations. He studied hard, and right when he had to take the exams, his condition became so critical. Lijo is still worried about his education. His ambition was to alter our lives by getting a good job. Now, he is fighting for his life. We want to do something, anything!"

16-year-old Lijo was running a temperature. What his parents hoped was just a viral fever turned out to be a diagnosis of Hyper Oxaluria. Lijo's body was continuously accumulating and excreting oxalate through urine, damaging the kidneys and his liver. He needs to undergo an urgent life-saving Liver and kidney transplantation to survive this critical situation.
Muthuswamu and his wife, Malliga are daily wagers who support their family on a daily wage of Rs. 600. Their first daughter, Lisa, is 21 and married. Lijo is their second child. While you cannot surmise when you meet him, Lijo has been in pain since childhood suffering from illnesses that his family struggled to understand. He was constantly on medication.

In mid-September last year, Lijo was running a fever. Within a few days, his face, hands, and legs were extremely swollen alarming his parents. They rushed him to the local hospital where they discovered that his kidneys were damaged.

"The doctor put him on dialysis immediately. But they did not have the required facilities or equipment to deal with the problem. They said he seemed to have something more and we should go to another hospital. After a few days, tests showed that his liver was also affected. We consulted Stanley hospital, moved him there to continue the treatment. Again, when his condition got worse, we moved from Tirunelvi to Neyyur, until we were told that he needs a transplant, and the hospitals we could barely afford were not equipped to handle his case."

With his income, savings, and help of friends, Muthuswamy has spent over Rs. 15 lakhs over Lijo's treatment. They are underprivileged, and yet sold every little asset they had to save their son's life. After switching several hospitals, the parents brought him to Apollo Hospitals, Chennai where he has been advised Liver and Kidney Transplantation at the earliest.
The surgery costs almost Rs. 36 lakhs. With very less income the family is not able to go further with the Liver transplant unless they get financial assistance. They have applied for PM/CM fund. Lijo's mother will be donating a part of her liver to save his life.

Lijo is battling for his life every moment, and time is of the essence. Your contribution can give him a chance to live his dreams.

Supporting documents
The specifics of this case have been verified by the medical team at the concerned hospital. For any clarification on the treatment or associated costs, contact the campaign organizer or the medical team.

Click here to contribute to Lijo or for more details on this campaign.
Donate 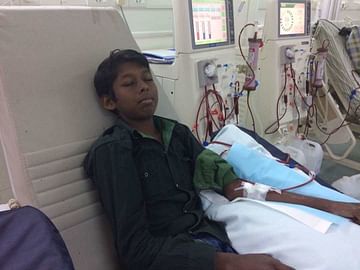 He dreams of creating a poverty-free future for his family while he is struggling to stay alive.