“My fever just kept rising and I went to the doctor. I knew I was sick, but never thought it would be cancer.”

One morning in May last year, Karla Dasu woke up with a high fever. He couldn't afford to miss work, so he immediately went to see a doctor who gave him some medicines. Over the next week, he had fever, severe headaches and started vomiting too. Thinking it was a more serious infection, he went to the hospital to consult another doctor. The results of the blood test shocked him and his family - Dasu had blood cancer.

Dasu's life turned upside down with the diagnosis

Dasu had Acute Lymphoblastic Leukaemia, a severe blood cancer. The doctors said that the chemotherapy needed to start right away. Dasu got himself admitted to the Basavatarakam Cancer Hospital, Hyderabad, and started treatment.

“I was not prepared for any of this, neither mentally not financially. Chemotherapy is a difficult process. It makes me very irritable and has physical side effects too. Every time I have a session scheduled, I just want to run away. But I stayed to get better.”

Dasu with his wife Divya

Dasu was a healthy man, with a regular life. He got married three years ago and had a future to look forward to. When the news of his cancer reached his family, they were shocked. Not only was he sick, he needed aggressive chemotherapy once every three days.

Chemotherapy's side effects are causing Dasu constant pain and suffering

Dasu throws up everything he eats. His condition is so bad that he can’t eat or drink anything. On better days, he takes liquid food and manages to keep it down, but more often than not, he is completely dependent on the IV drips, for his nutritional needs. This makes Dasu feel crippled and helpless, adding to the misery of cancer.

Just when he thought the worst had passed, his cancer relapsed

"After going through all of it, I thought I was cured. But all my optimism was gone when they told me my cancer was back.”

After going through the prescribed rounds of chemotherapy, Dasu thought he'd have recovered. But to his and his family's utter disappointment of him, his cancer was back. Now he needs salvage chemotherapy as well as a bone marrow transplant. That's the only way he can get better.

“More than my own physical suffering, what scares me is the thought of what my old parents will do without me. They’re dependent on me and here I am, on the hospital bed, unable to do anything for them.”

Even from his hospital bed, all Dasu worries about is his family. Being the breadwinner of the family, his responsibility extends beyond taking care of just himself. More than the pain and discomfort of cancer, it’s the thought of his parents' helplessness that keeps him up at night.

Poverty is the biggest issue the Karla family is struggling with

“I hate it that for my treatment, my parents had to sell the only property they had. Because of my condition, they don’t have any financial security or income anymore.”

Dasu's parents are ready to do anything to save him

Dasu used to work as an electrical supervisor for a small private firm for a modest salary. His earnings were barely enough to sustain their family of four. Now due to cancer, he’s not able to work and the family income has become zero. To fund his treatment, his family also sold off the only patch of land they had for Rs 5 lakhs. Now even that money has run out and they don’t have any means to continue Dasu's treatment.

Dasu’s illness has affected not just his life, but that of his family dependent on him. What makes their suffering worse is their helplessness and inability to deal with the situation. Dasu has a good chance of recovering and be up on his own two feet again, but he needs your help.

Your contribution will give Dasu a second chance at life.

The specifics of this campaign have been verified with the concerned hospital. For more details, please contact the campaign organizer. 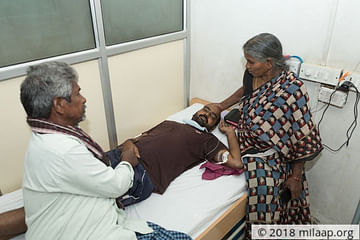 Karla Dasu is battling for life, a second time

26-year-old Dasu is fighting blood cancer again. Only a bone marrow transplant can save him.