Kalaivani's Heart Failed Her, But You Can Help Her Survive | Milaap
loans added to your basket
Total : 0
Pay Now

PJ
You are sending a message to
Priya Jebakaran
Go back

Kalaivani's Heart Failed Her, But You Can Help Her Survive

Shares
Shares
Share on whatsapp
She is a 41-year-old teacher who worked on Rs. 4000 salary purely out of love for her students until she was forced to quit because of a bad heart condition. Kalaivani never really got stressed when she had to manage a class of little rugrats, nor when she endured a lifetime of financial struggle. Now, she is on a hospital bed with her heart beating out of her chest because of a condition that needs immediate treatment. Unfortunately, because of such meager earnings, the family does not have enough funds to help her get back on her feet or worse, keep her alive.

The heart that failed her

41-year-old Kalaivani comes from a very humble home in Kovai, Tamil Nadu. She is a teacher with a 46-year-old husband, Shankar, and two teenage children Sanjay (16) and Akshaya (13). Kalaivani's life had only financial struggles written all over it until she was diagnosed acute pulmonary edema (fluid buildup in the lungs), electrolyte disturbances (causing weakness and dizziness), and cardiogenic shock (where the heart fails to pump enough blood for circulation).

Flying through hospitals for months

Until August all was well for this family of four. Suddenly, Kalaivani had spells of dizziness, respiratory trouble, loss of appetite, and palpitations. At this point, Shankar rushed her to the nearest hospital where an examination revealed the problem. Although a scan showed normal coronaries, an ECG performed later showed Ventricular Tachycardia (abnormally fast heartbeat), DC-verted and medically managed. She was then referred to GKNM Hospital, Kovai.

Here, Kalaivani was admitted and treated for the condition. Dialysis was done and she was discharged on 7th November. Since she did not show any signs of improvement, Shankar sought another consult on 8th November at The Madras Medical Mission. After a second evaluation, Kalaivani has been advised Radio Frequency Ablation and Pacemaker as a treatment option. Currently, it is her best chance at managing her condition as it is quite critical and may take a turn for the worse at any time.

Shankar earns just about Rs. 13,000 which barely covers the rent, household expenses, and the children's tuition every month. They could live modestly as Kalaivani was a working woman. Now, as the house is run on a single income, it has been hard on Shankar to pay the bills and cover medical expenses. So far, he has spent Rs. 1,50,000 for Kalaivani's treatment at GKNM hospital, Kovai, and has bills over Rs. 70,000 mounting since the day she was admitted at Madras Medical Mission. The cost estimated to treat Kalaivani's condition is a little over Rs. 6,20,000.

Help this family heal together

Shankar has been on leave to take care of Kalaivani for over a month now. Their family and friends have been helping to the best of their abilities, but everyone comes from a similar economic background. The children are living away from their parents, and currently struggling to prepare for their exams with their mother's health situation on their mind.

Kalaivani's daughter did not celebrate her birthday on Nov 29th hoping it would save money for her mother's treatment.

Any contribution you make can help Kalaivani's family survive this treacherous ordeal and recover from it quickly so she can go back home to her children. 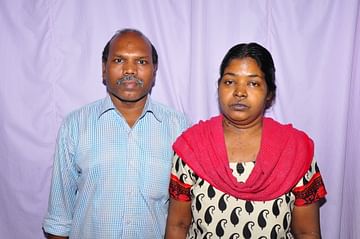 Help Kalaivani Get A Pacemaker

This procedure costs over Rs. 6l, and her husband earns just Rs. 13k to manage a family of four.

UPI: givetomlpmadras@yesbankltd (Copy to clipboard)
Click here to read the instructions before you make a bank transfer.