This farmer has borrowed heavily through terrible drought to save his son from cancer | Milaap
loans added to your basket
Total : 0
Pay Now

Shares
Shares
Share on whatsapp
Jeyaram Mani is a 17-year-old who has spent his last 2 years fight blood cancer. His father Marimuthu is a farmer who is under debt and cannot borrow anymore for Jeyaram's treatment. Jeyaram has a good chance of recovery if he gets a bone-marrow transplant in time.

Jeyaram was very sick when he was writing his class 10 exams. He had a fever but insisted that he would give exams – he had worked very hard for these exam. Jeyaram should have been overjoyed at scoring 95.6% in his exams, but he was too sick to continue studying.
Jeyaram at a temple before he fell sick

The next two years, Jeyaram took treatment for Acute Myeloid Leukemia or blood cancer. His family even qualified for PM relief fund which helped him complete his first course of chemotherapy. Jeyaram was to start class 11 last June, but unfortunately his cancer relapsed and he once again had to miss a school year.
Jeyaram always stood out because of his dedication to studies and his burning ambition to succeed. Despite battling cancer, he is more unhappy about missing out on school. His parents assure him he can always go back. But that fails to comfort Jeyaram who is too weak to even hold a book to read.
Jeyaram is back in Madurai taking treatment before the bone-marrow transplant
Jeyaram's parents can only watch as their eldest child's battles for his life. Chemotherapy is gruelling and Jeyaram needs to go through it all over again to prepare for a bone-marrow transplant.  His parents can do nothing to ease his disappointment at stopping his education.

Marimuthu has not had a job in the last one year

Marimuthu works as an agricultural labourer and in the last one year – his village near Thiruchendur has not had any water. Work has dried up which means the family has had no income. Jeyaram is his oldest son and saving his life was priority so he took loans worth 3 lakhs.
Jeyaram on an excursion two years back
With the family earning nothing due to draught, no one is willing to lend Marimuthuany more money. He has nothing left to even continue chemotherapy for his son. He knows that it is impossible for him to fund the bone-marrow transplant that will save his son.
In the last two years, Marimuthu has tried to find work doing other manual labour, but he gets paid only Rs 500 ($7.5) a day. He has two younger daughters – both of whom now live with his sister because he has no money to take care of them. Jeyaram's illness has changed everyone's life.
Jeyaram has once again started chemotherapy. A bone-marrow transplant is the family's last hope
Marimuthu has absolutely no avenues left open. He has no resources to raise the 20 lakhs needed for his son's bone-marrow transplant. Without the procedure, Jeyaraman's cancer will only keep relapse again. This farmer has only had misfortune till now. Change his life today by helping his son survive. Contribute now.

The specifics of this case have been verified by the medical team at the concerned hospital. For any clarification on the treatment or associated costs, contact the campaign organiser or the medical team.
Click here to save Jeyaram now.
Donate 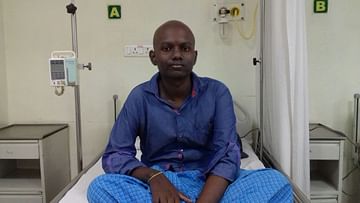 Save 17-year-old Jeyaram from Blood Cancer

Jeyaram has been fighting cancer for the last 2 years. He now needs a bone-marrow transplant to...