Today, more than ever animals need protection from human cruelty. Here's how you can help | Milaap

Today, more than ever animals need protection from human cruelty. Here's how you can help

You can be imprisoned for up to three months for keeping your pet chained up
India has banned animal testing and all animal-tested products
Cutting down a tree with nests and eggs counts as hunting and can attract a fine of Rs 25,000
Shaktiman, the horse that was maimed in public and Bhadra, the puppy who was thrown off a roof are both still fresh in the Internet scheme of events. The instances roused a collective online reaction that helped in catching and penalising the offenders.
both
The Indian Constitution has made specific provisions for animal welfare. Compassion for all living creatures is, in fact, a Fundamental Duty. The Prevention of Cruelty to Animals Act, 1960, covers different aspects of animal cruelty and the offenders in the above cases were booked under it.

However, animal activists in India call the act weak and say it is not enough to stop the rampant cruelty and abuse towards animals. Change can only come when people collectively demand for more stringent rules for animal protection.
Law is empowerment
In India, animals are protected by law and it is with the law that they can be best helped. Humane Society International (HSI) has developed short-term training for social workers and activists so they can put a stop to cruelty against animals knowing that the law is on their side.
Harish Iyer, Director of Strategic Partnerships, HSI, says that attending the session even once makes a big difference to making your case. “Being equipped with the law makes an impact in the fight for the underdog. After I took the course, I would take action with confidence, correctly articulating what happened. The authorities take you seriously when you know the law,” he says.

The idea is to help people understand different aspects of the issue from a legal perspective. When people understand the problem and its nuances, the way to a solution becomes clear. And a solution is very necessary in a time when crimes against animals are getting more and more shocking.
Harish thinks that there is a definite link between cruelty to animals and cruelty to humans. “As a child-sexual abuse survivor, I speak to many other survivors about their experiences. In their stories, I come across instances of animal cruelty by the abuser – like de-feathering a living bird, torturing dogs – that are signs of a depraved personality,” he says.
Here's what you can do
Take the first step in making India safe for animals and help HSI conduct extensive legal awareness sessions. Donate now.
Donate 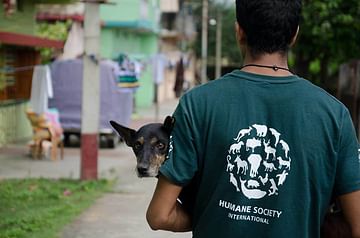 You can bring India one step closer to a more humne, compassionate society