How Rekha recovered her farming losses and bought a cow | Milaap

How Rekha recovered her farming losses and bought a cow

Shares
Shares
Share on whatsapp
After a few drives around rural West Bengal, it is pretty clear that the main driving economic sector for most of the locals is agriculture. Various types of vegetables are grown all around the countryside where rice, a key component to most Indian meals, is especially cultivated. Most of the farmers in the area are extremely poor, because selling their produce wholesale does not yield much money. Recent droughts in the area have also limited the income that can be earned through this profession.

That morning, I was able to speak with Rekha Hazra, who is a potato farmer along with her husband.  They have one child, a little girl named Ria who will be starting class 1. Rekha explained to me that recently, times had been very tough. She and her husband had difficulties with being able to afford things like fertilizer and seeds and other things like feed for their chickens and goats. Business had not been the greatest, because pests and weak harvests had limited their yields and the quality had gone down. She also explained that that her daughter's school fees had been burdensome, but that "We don't mind paying our daughter's school fees at all; it is very important to us." It was very moving to hear about their past financial issues and how it did not affect their decision to send their daughter to school.

Some of her neighbors had introduced them to Sreejan and the work they do with many of the rural community members who do not have access to banks or other financial institutions. They were able to apply for a loan of Rs. 10,000 through Sreejan and the wonderful Milaap lenders throughout the world. With this added capital, she shared "We were able to buy more quality fertilizers and seed, and that has helped this year’s harvest tremendously". Rekha stated that they are now also cultivating rice and have been able to purchase their own cow through their added income. They are now at a point where their financially stable enough to repay their loans and also cover all their expenses without making any sacrifices. 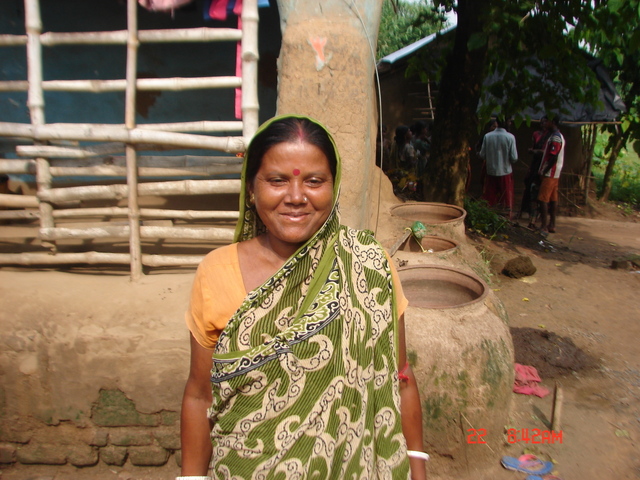 Rekha smiling for the camera during a group meeting.