You are sending a message to
Mahan Gowda
Go back

Shares
Shares
Share on whatsapp
Somashekar has been battling a rare but deadly disease for the last 10 years. This didn't stop him from working full-time and living life to the fullest. However, recently he was forced to quit his job and focus on curing himself as his condition has aggravated.

What is Crohn's disease?

Crohn's disease is a type of inflammatory bowel disease (IBD) that may affect any part of the gastrointestinal tract from mouth to anus. Signs and symptoms often include abdominal pain, diarrhea (which may be bloody if inflammation is severe), fever, and weight loss.

Crohn's disease, like many other chronic, inflammatory diseases, can cause a variety of systemic symptoms.Among older individuals, Crohn's disease may manifest as weight loss, usually related to decreased food intake, since individuals with intestinal symptoms from Crohn's disease often feel better when they do not eat and might lose their appetite. People with extensive small intestine disease may also have malabsorption of carbohydrates or lipids, which can further exacerbate weight loss.

How it all started

Multiple visits to the hospital did not help Somashekar, whose stomach pains were diagnosed as gastric issues by doctors. He would be admitted and treated for a few days, and then discharged, only to experience the extreme stomach pains again. This happened for years together.
In one of his hospital visits, Somashekar was diagnosed with Crohn's disease and immediately started treatment for it.  Somashekar continued his job as a technician manager in a services company in Bengaluru, Karnataka.
One day, on the way back from work, Somashekar's stomach pain suddenly shot up.

His small intestine had erupted, and needed to be operated in the next 3-4 hours.

Somashekar was immediately admitted to Manipal Hospitals, Bengaluru where close to 20 cms of small intestine was removed by doctors.

Somashekar has undergone 2 surgeries since then and has spent close to Rs.10 lakh. His only hope is to purchase a specific injection - of which he would be required to buy 29 of, in order to avoid his 3rd surgery.

He has since been admitted and requires further treatment. The 33-year-old is a father to a baby girl and a husband and is the only breadwinner for his family. Due to his condition and requirement to be under observation, there is no source of constant income for the family.

Somashekar requires all the help and support that he can get to get treated successfully so he can get back to earning and supporting his family.

There is no cure for Crohn's disease. It requires consistent treatment. Somashekar needs to buy specific injections in order to avoid his third surgery. 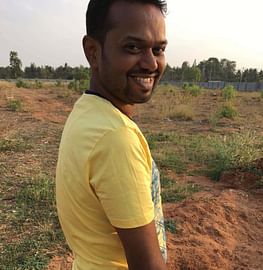 Somashekar has a rare disease and needs your support to get treated successfully!