5-year-old Cancer Patient Has Started Believing That The Hospital Is Her Home | Milaap
loans added to your basket
Total : 0
Pay Now

Shares
Shares
Share on whatsapp
5-year-old Keethana has a rare cancerous brain tumor that is growing on her optic nerve. If she doesn't get treatment on time, her cancer will spread dangerously fast. She has been taking treatment for over a year and has started to believe that her hospital is her real home. Her parents want to finish treatment at the earliest but can't afford it any longer.

They caught Keerthana's cancer because her eye started to bulge

Keerthana's father Sharanappa thinks that the condition might have started last July when she first came down with a fever. Slowly, even after the fever subsided, Keerthana eyes would water. Particularly, her left eye started to look like it was getting bigger and growing out of her face.

“When we took her to the doctor in our village, the doctor immediately looked at it and said it was Cancer. She asked us to go to Bangalore. We came here hoping that maybe the doctors here would tell us that it was something else. But my child had Cancer and since then, has been through over 40 chemotherapy sessions,” says Sharanappa.

Sharanappa is in Bangalore with Keerthana and while his wife is back home in their village near Gulbarga, caring for her youngest child. Keerthana has been in the hospital for the better part of last year. Even when they go back home – she asks her father when they'll go back to the hospital because it feels more like home.

The tumor behind Keerthana's eye is shrinking, but very slowly. She needs sustained treatment to make it disappear completely. But her parents who have lost track of how much they have spent till now – cannot afford such a treatment. They are worried that they may need to stop treatment and let down Keerthana in the worst possible way.


Keerthana playing at a park between her chemotherapy sessions

Sharanappa worked as a helper in a grocery store in his village. His small monthly earning is barely sufficient for the family. But with the regular absences caused by Keerthana's treatment, Sharanappa has lost his job and the family's only income. Treatment has so far been managed by borrowing heavily from family and friends.

But to Sharanappa the biggest loss seems Keerthana's happiest years being spent in the hospital. “She used to cry when we came to the hospital. She missed her mother. But slowly she got used to the needles piercing her small hands. Her home has become an unfamiliar place to her. Her pain filled life has become normal for her,” explains Sharanappa sadly.

Despite desperately wanting to take her home and give her a happy life, Sharanappa has no choice but to remain in Bangalore and look for work here till Keerthana is better. He is desperately looking for ways to save his innocent child from a terrible disease.

Keerthana's best childhood years seem to have come to stop because of her cancer. Without treatment, Keerthana will lose her eyesight and eventually her life. Her parents have no means left to save their daughter's life. 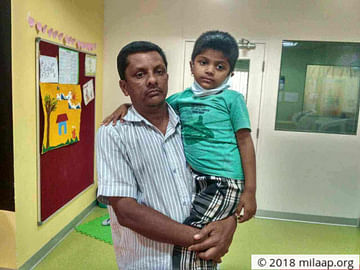 She has been fighting cancer for two years. Help her get chemotherapy.