This Kerala Student Is Fighting To Survive A Horrible Accident That Killed 2 Of His Friends | Milaap
loans added to your basket
Total : 0
Pay Now

You are sending a message to
Nissy Varghese
Go back

Shares
Shares
Share on whatsapp
Four months after his tragic accident, 26-year-old Blesson Varghese is still in the ICU of Rajagiri Hospital, Kerala, fighting for his life. Despite being admitted with severe internal bleeding and brain injuries, Blesson hasn’t given up. He has made it so far and is determined to get back to being healthy and active again. However, Blesson is still not completely out of danger. He has had two brain surgeries so far and needs to stay in the ICU longer to get better. All of Blesson’s progress will be in vain if he can’t continue treatment.

A series of unfortunate events

On the fateful day of the accident, Blesson and his three friends were returning home after winning the first prize in an inter-college festival. It was a day of celebration for the four men, who were all first year MBA students in Kochi. Unfortunately, life took an unbelievably tragic turn. Their car hit a stationary truck on the highway in Kozhikode. They were helpless for about 45 minutes before the ambulance arrived. By the time he was taken to the nearby hospital, his condition had worsened. He had severe internal bleeding and suffered serious brain injuries.

Two of Blesson’s friends passed away, while one suffered fractures and Blesson was left in a vegetative state.


“I was in Delhi when we found out about his accident and our parents had to drive four hours to reach him, and by then, his condition had massively deteriorated. Everything happened so soon, we didn’t even have time to process anything. We still can’t believe that we might lose Blesson. Every day we pray for his recovery, but only further treatment can save him now.” – Nissy Varghese, Blesson's sister.

Twelve hours after the accident, Blesson was finally taken for surgery. Blesson has had two major brain surgeries so far. He’s still in the ICU and will need to remain there to have a chance of survival.

With loans and piling medical bills, his family can’t afford to continue treatment

Blesson is bright and ambitious. He is a man of many talents and aspired to make a name for himself and support his parents. All Blesson’s dreams have come to a standstill now as he lays helpless in the hospital. His family is eagerly waiting for him to get better and be the cheerful person he once was.


“He loved cooking, playing football and singing. He was also a topper in his studies. We all knew he was going to do something great with his life, but now he’s reduced to a state where he can’t even move on his own. It breaks our heart to see our once hail and hearty Blesson suffer so much. Every day is a battle.”

Blesson had taken a loan to pay for his MBA studies. His parents are retired and live a simple life with minimal savings. Blesson’s accident has left the family with nothing now. They have spent nearly 16 lakhs on his treatment so far but need more to keep giving him the treatment he requires. Blesson can make it with further rehabilitation. However, his family can’t afford treatment any longer. With your support, their beloved Blesson can live.

Blesson needs your help to say in the ICU longer to survive the tragic accident that has left him helpless and severely injured. However, Blesson is slowly recuperating from the trauma. He has had two brain surgeries and needs to further ICU care and rehabilitation. Blesson needs 8 lakhs to continue treatment, but his family has exhausted all their savings.They need urgent help to save Blesson.

Your support can save Blesson’s life. 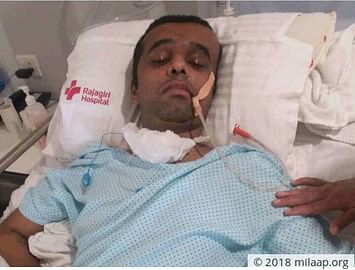 Blesson needs to stay in the ICU longer to survive. Your support can save him.