5-year-old Krisha Wants To Save Her Big Brother With Her Own Stem Cells, And She Can With Your Help | Milaap
loans added to your basket
Total : 0
Pay Now

5-year-old Krisha Wants To Save Her Big Brother With Her Own Stem Cells, And She Can With Your Help

"We have been looking for a donor in the registry for years since it seemed like nobody in our family is a match. Today, our 5-year-old daughter wants to donate her bone marrow. She wants to save her Bhaiya, but we have no money for the procedure."

Yash has been fighting Thalassemia since he was 3 years old. For 11 years, there was no HLA matched donor in the family or the registry. Over the years, medicine has advanced. The family had more children, and they just discovered their youngest child can save her brother. What's stopping them now are funds.

Yash is closest to Krisha in his family and Krisha always confides in Yash. They are like best friends. Krisha loves playing with her brother and spending time with him. She misses him the most when he has to go to the hospital for blood transfusions. Because of Thalassemia, Yash's blood count drops every week. The fatigue and exhaustion fade as he gets blood transfusions. The cycle continues every other week.


Yash with his sisters Krisha and Saniya (11)

“Yash never had a normal childhood because of this blood disease. Immediately after the transfusions, he falls ill for a couple of days, and then he’s okay for around 2 weeks. After that, he starts experiencing weakness, doesn’t feel like eating, moving or playing. Every time Krisha sees Yash tired, unable to get off the bed, she pleads us to do something and make him better again." - Mala, mother

Now that his little sister is the suitable donor, shortage of funds is delaying his transplant

While Yash was undergoing blood transfusions, his parents tried every possible way to find a donor for his transplant. They underwent donor matching tests, went to different stem cell registries, but nowhere could they find any donor. Their second child Saniya was also not a match, so they thought it best not to put Krisha through the pain.


“When Krisha kept insisting that she wants to save her Bhaiya, the doctors suggested testing her. Mala and I were relieved that Yash will never have to live a life dependent on blood transfusions as his little sister is a suitable donor. Now, we are struggling to arrange funds for Yash’s bone marrow transplant.” -  Shanidas, father

Shanidas looks after his family of five by growing crops in his tiny piece of land. He barely Rs 4000 per month. With the little income he earns, he has to look after his children’s education, household expenses and adding to it, Yash’s medical expenses which itself costs Rs 2000 every month. It is beyond his reach to arrange Rs 25 lakhs for Yash’s transplant when he’s already in deep debts.

“We had to let our son go through all this because we couldn’t find any donor, now we can’t let him die, because of no funds. Please help me save my son.” - Shanidas, father

"Bhaiya is always in the hospital now. Mumma says he would have to go everyday if I force him to play. I feel bad that Bhaiya cannot play. He gets sick if he does. I am saving in my piggy bank for Bhaiya. Papa says I don't have enough." - Krisha

You can help Krisha save her brother from losing to this disease. 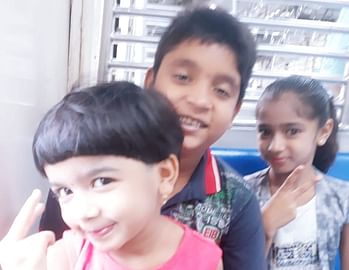 Krisha wants to give her blood and save her brother, so that he spend more time with her.

He can live a normal life with a bone marrow transplant, but he your support.

UPI: rzpy.givetomlpyashbhoi002@hdfcbank (Copy to clipboard)
Or
Click here to read the instructions before you make a bank transfer.