6-year-old Will Lose Her Life If She Bleeds, And Only You Can Save Her | Milaap
loans added to your basket
Total : 0
Pay Now

v
You are sending a message to
venkatesh
Go back

6-year-old Will Lose Her Life If She Bleeds, And Only You Can Save Her

“When she had the transplant last time, we thought the worst was over. Now the nightmare is back, worse than ever. Every time she starts bleeding out of her nose or mouth, my heart just stops! I cannot breathe until I know my baby girl is out of danger.”

6-year-old Varshitha gets all the attention at home. Her parents watch her like a hawk. They do not let her out of their sight. She cannot play with friends, nor can she go out whenever she likes. She has not had a normal life since Feb 2016. Her body stopped making blood. Although they fought hard and exhausted everything on a cure, they failed. Varshitha now needs another shot at beating this disease before she bleeds out.

It began last year when Adi Narayana and Bhagya Lakshmi realized that their daughter Varshitha was having frequent episodes of fever. In February 2016, when her temperature spiked, they took her to a hospital in Vizag. They discovered her platelet count was very low.

“We bounced from hospital to hospital. A few tests at Apollo Chennai revealed that she had a type of aplastic anemia. They referred us to CMC Vellore. For 6 months we were in and out of the hospital, almost spending every day there. Finally, Varshitha was diagnosed with Fanconi Anemia.”

Just when they thought the worst was over, the disease came back to haunt her

Fanconi Anemia is a rare blood disorder. The body slowly stops making blood because of bone marrow failure, which means, eventually Varshitha would bleed out. Without new blood, clotting factors, the cells that protect her against infections, and more, Varshitha was in more danger than ever. There was only one cure – a stem cell transplant.

“We wanted to save her at any cost. It was all or nothing. It cost us over Rs. 25 Lakhs but at the end of it, Varshitha had the stem cell transplant. My other daughter, Harshitha, was the donor. It was a tough time, especially because we had to be isolated from everyone to avoid any infection.”

For 11 months, Varshitha was fine. She had a new life and she seemed so healthy. The fever hit her again. When she began bleeding from her nose, Bhagya felt the familiar sense of terror creep up. They rushed back to CMC only to hear their worst fear come true. The transplant had failed. She now needs another transplant to survive.

“We do not have as much time on our hands this time. Last time we put in everything we had for the transplant. Only now we began repaying some of those loans. Again, we should arrange for Rs. 20 Lakhs. Nobody is ready to help us now. With this disease, and Varshitha’s current condition, anytime we will lose her. So, we have to do the transplant immediately!”

Adi Narayana makes Rs. 18000/month to support his family of four. Most of his income now goes towards medical bills and loan repayments. This time, the family is in dire need of financial assistance to save their little girl.
Varshitha has weeks if not months to beat the disease. Your contribution will save her life.

The specifics of this case have been verified by the medical team at the concerned hospital. For any clarification on the treatment or associated costs, contact the campaign organizer or the medical team.
Click here to help save little Varshitha
Donate 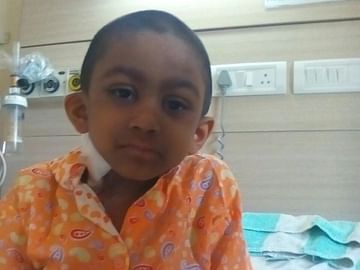 Varshitha's body has stopped making blood and she needs an urgent stem cell transplant to survive.