My 3-Week Old Lost Her Twin Brother, Help Us Save Her Now | Milaap
loans added to your basket
Total : 0
Pay Now

You are sending a message to
Sagar Sanas
Go back

My 3-Week Old Lost Her Twin Brother, Help Us Save Her Now

Shares
Shares
Share on whatsapp
“Both my children came into this world together. But before they could hold hands and support each other through the joys and sorrows of life, one of them, my son, left this world forever. My three week-year-old daughter is all that I have left,” says Pratiksha Kanekar, a housewife from Pune, who wants to save her only surviving premature baby who is fighting for survival in the NICU.

They waited for their twin angels for so long, but fate played a cruel trick

Pratiksha and her husband, Pramod Kanekar, could not contain their joy when they learnt that they were expecting twins; after all, they had been childless for over 15 years. Their age or the extra expense did not matter, because they knew they would be blessed with double joy! However, fate had a different plan for them.

Pratiksha’s lifelong battle with blood pressure negatively impacted her pregnancy. Even though she took medicines to keep it under check throughout, the inevitable happened when she was only 26 weeks pregnant. Her blood pressure rose to dangerous levels. This affected the blood circulation of the babies while they were in the womb. The doctors had no choice but to deliver them via an emergency C-section.


“I did not understand what was happening. My body was becoming weak and I was slowly losing consciousness, but I had only one worry in mind: My babies’ well-being. I remember telling the doctor to save them instead of me if things came to that,” recalls Pratiksha.

On February 26, Pratiksha’s twins were born – underweight and with low heart rates, barely surviving. But the worst part of it all was that their mother had to be rushed to another hospital right after their birth because she was critical. “It was the moment that I had been waiting for a long time but I couldn’t even see my babies’ faces after they were born. I met them after four days only. What did I do in my lifetime to deserve such a punishment?” she asks.

The baby boy fought hard to be with his sister, but couldn't

The babies were kept in incubators and given utmost care in the NICU, but the boy baby could not make it. “The doctors told us that he fought till the end, but blood was not circulating properly in his tiny body. I wish I could have done something to save him. But what could I have done except pray? Now, I have sleepless nights thinking about how my poor baby suffered while I watched,” says Pramod.

Pratiksha cannot get over the death of a child, but she wants to live for her daughter now. “My daughter is my only concern now. I know we can save her. We will give everything it takes to make sure that she grows up to be the apple of our eyes,” she shares.

Pramod and Pratiksha will do anything to save their baby girl, who is still struggling to make it in the NICU. But Pramod is a supervisor in a small firm in Pune and has already spent all his money on hospital expenses so far. The baby girl is slowly gaining weight and doctors are hopeful that she will survive, but money is a problem. She needs to be under special care for at least 45 days more, but Pramod cannot afford it. You can help the small baby, who is the only happiness in her parents’ lives now. 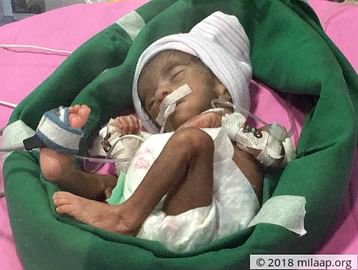