Daily Wager Has Nothing Left To Save His 9-Year-Old From A Failing Heart For The Second Time | Milaap
loans added to your basket
Total : 0
Pay Now

"My son had a heart surgery when he was just 3 years old, doctors said that there are 50-50 chances that he might need another surgery when he grows up. I did everything possible to protect him, I took him to hospital every year for check up, he has not missed medicines even a single day, I even applied for insurance so that I don't have to run for money at the last minute. Now, my nightmares have come true but all my efforts have gone in vain. Neither the insurance, nor my savings are enough to save his life now." - Umapathy.

He had several holes in his heart at birth

Thirumurugan was rushed to NICU soon after his birth. He had breathing troubles and his lips and skin turned blue. After a series of tests, doctors told Umapathy and Porkodi that he has holes in his heart because of which there is less oxygen in his heart. They were shocked because the pregnancy scan reports did not reveal his condition. He was extremely underweight so they had to wait for the surgery until he turned 3.

"Before he had the surgery, everyday was a struggle. He had difficulties in feeding, he used to cry day and night. He was taking medicines more than food. We thought we would lose him but by God's grace, he was saved." - Umapathy.

Thirumurugan is an introvert, the most disciplined boy in his class. He likes to draw and has won many prizes at school. He is equally good at studies. He never had any symptoms after his first surgery except that he was never able to run fast and sometimes he falls short of breath when he climbs stairs. Fearing infections and breathing troubles, his parents never allowed him to play outside. There were times they had felt bad for not allowing him a childhood but it was to avoid any risk to his life. Last month, they took him to the hospital for severe cold and cough. The doctors said that his heart valve has narrowed, restricting the blood flow to his lungs and he needs surgery at the earliest.


"His cold has not subsided and sometimes he struggles to breathe. He knows that he needs a surgery. He did not tell us anything but we could see the fear in his eyes. We keep telling him that he will be fine but one day he asked us if he is going to die. We don't know how to comfort him." - Porkodi

This father did everything possible to save his son, without your help all his efforts will go in vain

Umapathy is a daily wager who welds and earns around Rs 5000 per month. For the first surgery, he was totally unprepared and he had to sell Porkodi's jewelry and borrowed from his friends. He spent 3 lakh for it. After which he applied for Tamil Nadu Chief Minister Health Insurance Scheme to manage in case of unforeseen situations. Unfortunately, his insurance scheme covers only 1.6 lakh and he needs 6 lakh for the surgery. He is not able to bear that despite all his efforts, he is still not able to afford the surgery. He has got nothing to sell, his friends are also poor and they cannot lend him such a huge amount.

This daily wager was very protective of his son and did everything in his capacity so that his son does not have to face the horrors of heart disease again in his life. Unfortunately, Thirumurugan is fighting for life again, and only surgery can help him.


Without your help, all the progress Thirumurugan has made through the treatment will go in vain 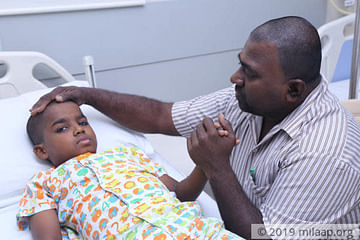 9-year-old Fears Death And Surgery Is His Last Chance Of Survival, His Father Cannot Afford It

Even the insurance cover is not enough, without your help poor father's efforts will go in vain.