Teacher Forced To Work As A Daily Wage Laborer Struggles To Save 1-Year-Old From Death | Milaap
loans added to your basket
Total : 0
Pay Now

"Despite being an MSc graduate, I struggle to save my son. I take up any daily wage job now. I can't lose my son"- Sathish. 1-year-old Srivarshan's father.

When Sathish Kumar got appointed as a teacher in school, his wife, Selvamathi and he were looking forward to living the life they had envisioned together, but the death of their 5-month-old baby pushed Sathish into depression and he ended up losing his teaching job. However, they were filled with happiness again when their second child, Baby Srivarshan was born in February last year. But as a cruel twist of fate, he was diagnosed with a fatal disease that can take his life at any moment. Sathish is now a daily wage labourer, struggling to save his son.

Apart from being a little underweight, Baby Srivarshan did not have any visible problems at birth. Sathish and Selvamathi were happy to take home a healthy baby, in the hopes that they would be able to start their lives all over again after the tragic death of their first-born. But when Srivarshan turned 5-months-old, he began suffering from cold and high fever for days together. His worried parents took him to hospitals in their hometown of Dharmapuri, but he did not get better at all.

“ I borrowed a huge sum of money to take him to better hospitals in Hosur and Vellore, but doctors always said it was just pneumonia. This made us very anxious as he started appearing weak and frail - unlike a normal baby - within just a few months.”-Sathish

After a long and painful wait, Sathish and Selvamathi’s baby boy was diagnosed with Severe Combined Immuno Deficiency, a genetic disorder marked by a defect in the specialized white blood cells that defend the body from infection by foreign bodies such as virus, fungi and bacteria. The only curative treatment for this disease is a bone marrow transplant, without which death is also a strong possibility.

Srivarshan has been admitted ever since a good hospital in Chennai, where his life is now being sustained by immunoglobulin injections that he receives once in 28 days. One dose of these injections cost Rs 14,000 – Sathish has been begging even strangers at the hospital to help him get these for his son. Without it, Srivarshan can succumb to even a small infection.

“Ever since our baby boy was diagnosed with this disease, we have been very careful. We don’t touch him with unwashed hands and use only clean clothes to hold him. If we are not extremely careful, we can lose him. He gets colds regularly and they can deadly within no time - that is why we cannot even take him outside the hospital now – we even celebrated his first birthday here. I bought a cake and shared it with everybody in his ward. After all, I don’t know if he will live till his next birthday.”-Sathish, with tears in his eyes.

When Srivarshan was born, Sathish had resolved to build his life back again - try to find a more stable job and be there for his wife and son. He was looking forward to being the father he always wanted to be when Baby Srivarshan was found to have a deadly disease. This broke his spirit completely. Now he is a worried man who does not know how he is going to save his only surviving baby.

“The memories of losing my first son are still fresh in my mind. I had not gotten over the guilt of not being able to save him before I was told that Srivarshan too is in the clutches of death. I am trying to spend as much time with him as I can because I fear losing him any second, and the saddest part is I cannot do anything about it despite being so educated.”-Sathish

With less than Rs 500 left in his pocket, Sathish and family are completely dependent for food on the kindness of friends and strangers in the hospital who feel bad about their condition. He tried looking for odd jobs in Chennai but dropped the idea after Selvamathi started showing symptoms of depression. She would cry inconsolably with her baby in her arms and then be quiet for a long time after. She has stopped taking care of herself too - she hardly even drinks water properly now.

“I used to work for daily wages or even drive private cars for a meagre amount – today I am not even able to do that well as I need to be there for my son all the time. I am completely exhausted and running out of hope and money. Please help me save my son.”-Sathish

Baby Srivarshan is suffering from a fatal immune-deficiency disorder that has made him so breathless that he cannot even eat properly. He is severely underweight and not growing well; even a small infection can kill him at this point. A bone marrow transplant is the only way that he can survive, but his father Sathish, a teacher forced to work as a daily wager, is now jobless and completely helpless. He stands to lose another baby if he does not get urgent help. 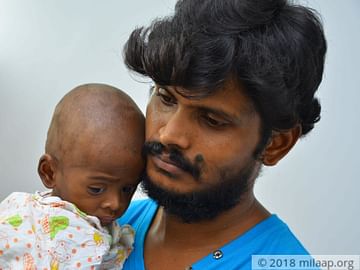 1-Year-Old Srivarshan Struggles To Breathe And Eat, He Needs An Urgent Transplant To Live

This baby's life will be painfully short without a bone marrow transplant.

UPI: givetosathishku@yesbankltd (Copy to clipboard)
Or
Click here to read the instructions before you make a bank transfer.