This Boy Hates Cancer Because It Has Taken Him Away From His Family And Friends | Milaap
loans added to your basket
Total : 0
Pay Now

Shares
Shares
Share on whatsapp
Wasim hates cancer. Not just because he’s in unbearable pain all the time or that he looks so different from before, but because the disease has isolated him. Away from everything he loves – school, home, his brothers and friends – Wasim believes that no one wants to meet him because he has cancer.


“When his brothers call he says ‘I know you’re not coming to see me because I have cancer’ more than anything, he’s upset about this. Everyone loves Wasim in our neighbourhood…even his brothers go to him for everything. Cancer has changed all of that for him. While he worries if he will ever be like that again, we worry that we might not be able to save him after tomorrow…” – Nasiruddin, father

His father hasn’t earned a single rupee in 6 months

It’s been 6 months since Wasim (15)  was diagnosed with a cancerous tumour in his pelvis. That’s 6 months of running from one hospital to another, trying to afford treatment. 6 months of excruciating pain. And 6 months since Nasiruddin has earned a single rupee.

“I borrowed from everyone I knew. I took him to Calcutta, Vellore, Bombay and finally again to Calcutta. It took us that long to find out what it was. When we did, we immediately started chemotherapy. But now it’s been 6 months. His treatment isn’t over yet .. he needs 4 more cycles. I can’t afford it anymore…I just can’t. I haven't gone for work.”

It was just a stomach ache

Phoolee Begum and Nasiruddin still can’t believe how this all began. How suddenly, all their lives changed. It was just a stomach ache was what they thought.

“We thought that he probably ate something on the way from school. He didn’t have any other pain…but this one kept increasing every day.”

Nasiruddin is a weaver and used to earn Rs. 200 every day. It wasn’t always enough, but they somehow managed. Savings, however, were out of the questions. Now Nasiruddin doesn’t have anything left with him. He has spent lakhs on his son’s treatment till now and hasn’t even been able to repay his debts. Borrowing more is out of the question.

Wasim longs for the life he once had – a normal, pain-free one. He needs chemotherapy to fight cancer for good. 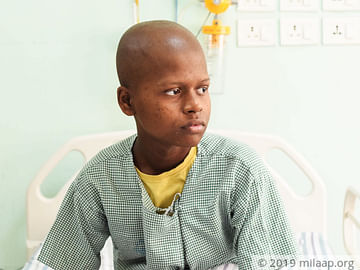 His Father Hasn't Earned A Single Rupee In 6 Months