Teenager Thought He Had Beat Cancer, But It Relapsed In Just 5 Days Deadlier Than Ever | Milaap
loans added to your basket
Total : 0
Pay Now

Teenager Thought He Had Beat Cancer, But It Relapsed In Just 5 Days Deadlier Than Ever

“It seems like we are never meant to be happy. We were so thrilled after Shaswat’s final chemotherapy got over in May, we were going to go back to our village after 8 long, difficult months in Mumbai. But just after 5 days, Shashwat got a very high fever and a horrible infection. I’ve been devastated ever since we got to know that his blood cancer has returned and in order to live, he has to undergo an urgent bone marrow transplant. I gave everything I had for his chemotherapy – how will I save him now?” – Sachidanand, Shashwat’s father

The Doctors Were Awake For 4 Nights Trying To Save Him

14-year-old Shashwat was diagnosed with Acute Myeloid Leukemia – a deadly form of blood cancer - last year which has been absolutely brutal on him. In September-October 2018, Shashwat lost over 13 kilos of weight in just 45 days!

“He had a fever and headache for weeks at a stretch. His ears would hurt so much and he was so weak that he couldn’t walk or talk. After he relapsed, he was put in an isolation room for 15 days and he was so critical. Even if he drank some water, he would throw up instantly. These 15 days were so terrible – Runa and I lost our will and we thought he will not survive. His condition was so bad that even the doctors were awake for 3-4 nights continuously, trying to save him.”

Shaswat and His Parents Have Seen Nothing But Hardships

“We are from a small village in Begusarai in Bihar. We had to come to Mumbai for chemotherapy last November and we had to first live in the slums because we had no money. And before that, we had to postpone his treatment too. In the middle of taking care of Shashwat, my wife's brother died due to kidney failure too. She’s been so depressed but she’s trying to fight through and help Shashwat too.”

Shashwat and his parents have stayed in Mumbai for the past 10 months and now they don’t have anything left to pay for Shashwat’s bone marrow transplant which costs Rs. 20 lakhs.

Shashwat’s Parents Need Your Help To Save Him

“I work as a farmer and a part-time tuition teacher for some kids in my village. I earn only Rs. 6000/month and we’ve sold everything we could. We’ve been here in Mumbai for 10 months and it’s so expensive. We don’t know where we’re going to live from now. For his treatment, I’ve already spent Rs. 2.5 lakhs. And now, he needs his treatment urgently. I can’t save him without help. You are my only hope.”

14-year-old Shaswat is running out of time to get a life-saving bone marrow transplant. His condition is worsening by the day and he is just getting weaker and weaker. His parents are in tears every single day because they can’t seem to figure out how to save him. They need your help urgently. 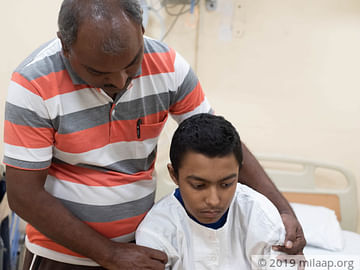 Shashwat and His Parents Have Seen Nothing But Hardships

I gave everything I had for his chemotherapy – how will I save him now?

UPI: givetomlpsachichan1@yesbankltd (Copy to clipboard)
Or
Click here to read the instructions before you make a bank transfer.