For 6 Years He Has Survived Only On Medicines, Now It’s Not Enough | Milaap
loans added to your basket
Total : 0
Pay Now

For 6 Years He Has Survived Only On Medicines, Now It’s Not Enough

Shares
Shares
Share on whatsapp
Shanmukha Karthikeya was only 2-months-old  when he had his first surgery. His bile ducts were blocked.  There were only 20 % chances of success but the parents decided to take the risk, they couldn't give up on their son. Karthikeya fought hard and made it - but his life hasn't been the same since.

“He made it but ever since then, my child had to take pills to stay healthy. It had become a part of his routine but then he grew up and started asking questions. 'Why am I the only one taking medicines? My friends don’t take it'. How do I tell him that now he has to take so many more, that he needs such a big surgery to survive. Is this never going to end for him?" - Siva, father.

He curls up in bed, holding his stomach due to the severe pain

Karthikeya is a very active child. Despite frequent fevers every now and then, his energy was always the same. But now he is unable to sleep at nights - he has severe pain in his stomach. His liver is giving up on him - he needs an urgent liver transplant - that's his only hope.

“Now he just lies on the bed holding his stomach in pain. Doctors say it is his active nature that kept him safe for so long. I want my child to smile like before. He keeps crying till 4 in the morning and then falls asleep after he is exhausted. Nothing I do can take away his pain," - Padmini, mother.

“For 2 years we went to different doctors but the itching on his body did not subside. Medicines didn't have any effect. Then one day, just recently, he had very high fever - his entire body, even the  white of his eyes turned yellow.  The tests confirmed that only a transplant can save him now."

Siva works as a lecturer in a small college. Whatever he earns goes in rent, Karthikeya's medicines and other necessities. Whatever he had saved for emergency is also now over. He needs 18 lakhs to save his son, but he just can't afford it.

We spend 1.5 to 2 lakhs every time he gets a fever

Karthikeya’s condition is very critical and even a small infection can lead to severe consequences.

“He is vulnerable to infections, so we don’t send him to school anymore. In the past two months he got fever twice and each time he was admitted him, the cost of antibiotics etc. reached upto 2 lakhs. We are already in debts and the next time he falls sick we… we might not be able to even pay for the basic medicine.”- Padmani, begging for help

Your help can save this 6-year-old and give him a chance to lead a normal life. Only a liver transplant can save him and without your help, it won't be possible. 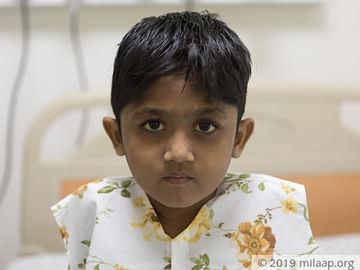 Only An Urgent Liver Transplant Can Save This Boy's Life

Without your help Karthikey won't be able to survive.

UPI: givetomlpsiva3@yesbankltd (Copy to clipboard)
Or
Click here to read the instructions before you make a bank transfer.