R
You are sending a message to
Reshma
Go back

"He is only 13-year-old but he has already been through so much pain and shocks in his life. His mother passed away unexpectedly 2 years back. After his mother's death, his father lost his sense and became mentally challenged. The once playful and happy child turned into very calm and matured for his age. He says often that he'll take care of his father and make him a normal person but now he is battling for his life after an accidental fall. His father doesn't realize that his life is at risk. He cannot be saved without an urgent surgery."  - Yegambaram, Uncle of Sambasivan.

Sambasivan is in 8th grade, he is a very bright student. He lives in his village with his father, grandmother, uncle and aunt. On that fateful day, when he climbed a coconut tree to pick coconuts he accidentally fell down and injured his head terribly. He became unconscious and his uncle rushed him to a nearby hospital. But they were asked to take him to a hospital in Bangalore as his condition was critical.


"I didn't realize that it would turn so critical,  I borrowed money from my neighbors and rushed him to Bangalore hospital.  Doctors said he needs immediate surgery to remove the blood clots in his brain. I had only Rs 5000 with me and I begged the doctors to save him. I thought with that surgery everything is over and he would recover but our nightmare continues one after the other. His head is swelling up now and he bleeds through his nose. I can't bear to see him in this condition, he deserves a life. I feel helpless. " - Yegambaram.

Sambasivan is hurt that his father can't understand his condition, he pleads his uncle to save him

Sambasivan was able to talk a few words after the surgery. He was hurt that his father couldn't understand what had happened to him, he cried a lot. He is in excruciating pain and he can't bear it. His uncle has been spending sleepless nights and desperately trying to save him. Unfortunately. his condition deteriorates every day.  Cerebrospinal fluid, a protective fluid that bathes the brain and spinal cord cushioning them against trauma, discharges from his nose every now and then. Only a craniotomy, a surgical procedure to correct the defect of the skull, can fix this.


"He had an injection in his spine 2 days back and after that, he couldn't talk. He has severe diarrhea, he throws up everything and he is slowly losing his memory. The last words he spoke was 'Please save me, I can't bear the pain'. His words are still ringing in my ears. I cannot forgive myself if I fail to save him. Even while he was in so much pain, he asked about his father. I cannot stop crying. He is a strong boy, he can fight but I need to support him now and I'm helpless." - Yegambaram.

Sambasivan's father is taking treatment for his mental illness in CMC Vellore. His uncle has been spending for his medicines and taking care of him. Yegambaram has spent nearly 5 lakhs for his treatment. He sold the only house he had and borrowed heavily from everyone he knew. He still has unpaid bills. Without the urgent surgery, all the efforts he had taken will go in vain.


"A few of my family members asked me not to sell the house and to leave everything in God's hands. How can I do that? I have always seen him as my own son. I'm only a driver and my earnings are hardly enough to feed my family. The treatment expense is beyond my means but I did everything that I could possibly do, I sold my house, I spent everything I had with me. All I have now is Rs 10,000, the money I borrowed from my friend. Except this I have nothing left with me and no one to turn to for help. I don't know what I can do to save him." - Yegambaram.

13-year-old  Sambasivan suffers severe brain damage after an accidental fall from a coconut tree. He lost his mother and his father, a mentally ill person has not realized his son's condition. His uncle has been struggling all alone to save his life. He desperately needs your help. Only urgent surgery can save Sambansivan's life. Your support can save his life.

Your kind contributions can save 13-year-old Sambasivan's life 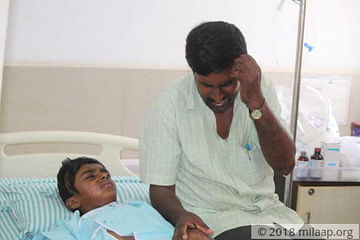 13-year-old Sambasivan's Brain Is Swelling And He Bleeds From His Nose, Only Urgent Surgery Can Save His Life

His uncle is struggling all alone to save his life. He needs your support.

UPI: givetosankar@yesbankltd (Copy to clipboard)
Or
Click here to read the instructions before you make a bank transfer.