Airtel Cable Operator Who Is Unable To Save His Baby Girl From Liver Disease Needs Urgent Help | Milaap
loans added to your basket
Total : 0
Pay Now

“She’s in so much pain that it kills us not to do anything about it. She cries all the time because her stomach hurts. The doctors told her liver is failing and my daughter has just a months time if she doesn’t undergo the transplant sooner. Just the thought of losing my daughter gives me shivers. Without money, I don’t know how to save her.” - Arun Kumar, father

Arun Kumar sets the cables of Airtel tower to earn an income of Rs 10000 to look after his family. He had already borrowed heavily for her daughter’s treatment. And now, with nowhere to seek help, he’s struggling to save his only daughter.

A few hours after her birth, Riya was put in a glass box for 5 days as she had infection in her blood. She never had any health issues for 2 months after that. Despite financial difficulties, Arun and Anusha made sure that Riya eats healthy food and they never missed her doctor check-ups in their hometown Nizamabad, Telangana. But last month, Riya’s stomach started swelling up and her skin and eyes turned yellow.

“We didn’t know anything was wrong with her. We gave her medicines hoping the jaundice would go away. Few days passed by and her condition did not change. The doctors did some tests and told us that her liver is damaged completely. We had taken such good care of her. I still cannot understand how a small baby’s liver can be damaged!” - Anusha, mother

Because of her increasing jaundice levels, Riya’s liver got completely damaged. The swelling in her stomach is just increasing and her fever keeps recurring. Every time she drinks milk, she passes it through stool immediately. Riya’s parents are most likely going to be the donor, but she doesn’t have much time. Arun and Anusha are struggling hard to afford their daughter’s medicines let alone afford the life-saving transplant.


“I was the happiest every since came into our lives, now I feel helpless for I’m unable to save her. She’s just 5 months old and she’s already going through a lot of pain. I get scared, whenever I see the size of her stomach constantly increasing as her liver is terribly swelling. For the past few weeks, she had more medicines than food. It’s only the way we could keep her alive.” - Anusha, mother

They have to let her go if they don't get help

Arun and Anusha’s life felt complete ever since their little daughter came into their lives. But the joy of Riya’s birth was marked by constant anxiety about her health. Arun borrowed Rs 1 lakh just for his daughter’s tests and treatment. Arun is determined to save his only daughter. The only thing that is stopping him now is lack of funds.

“I couldn’t even describe the pain we felt when the doctor’s told she’s dying. She hasn’t even started sitting or even grown small treat. She’s too little to suffer all this and she shouldn’t suffer anymore because of our poverty.” - Arun, father

If Riya's transplant is delayed any further, she’ll lose her life. Your help can end little Riya’s struggle and give hope to these helpless parents to save their only child. 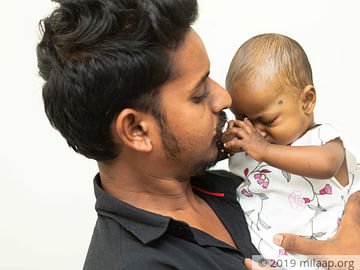 Parents could keep her alive with medicines, she'll not survive without liver transplant