This Brave Man who Fought the Worst Battles in Life is now Fighting the Last Stage of Chronic Liver Disease | Milaap
loans added to your basket
Total : 0
Pay Now

Shares
Shares
Share on whatsapp
42-year-old, Ram Chand's life has never been an easy one from his early age. He has lost two dear people in his life. He has always been a support to his family despite all the tragic incidents. Now life has challenged with him a chronic liver disease. He needs to undergo a liver transplantation immediately to survive.

His chances of survival are very low without the transplantation

He has to undergo an urgent liver transplantation

Ram Chand lives in Andhra Pradesh. In January 2016, he had a swelling in his feet. A couple of tests were taken but the reason was not spotted. He again a consulted a doctor on April because he still had the swelling. He had pain in the stomach. The doctor suggested an ultrasound. The reports revealed that he has chronic liver disease and it has already progressed to the last stage. He was insisted to undergo a liver transplantation immediately and any delay will cost his life.

He has lost his sister and father

Ram Chand has four sisters. One of his sisters passed away due to cerebral Malaria. One of them is a divorcee.One has lost her husband. His father passed away from acute liver disease. His mother is now living with another sister. This is the worst that could ever happen to a middle-aged man. Nevertheless, he was determined to support his mother, sisters and their children.
His mother and sisters are dependent on him. His marriage lasted for only 8 months.

“This is my fate and I have accepted it. I’m worried about my sisters and their children. I have to live to take care of them. They cannot lose me”

He has devoted his life to his family

Having lost his sister and father he shouldered the responsibility of taking care of his family. In 2009 he got married but the fate has proved cruel this time also. He lived together with his wife only for 8 months. His wife was diagnosed with Schizophrenia. She is now undergoing treatment in Bombay. This turned out to be a big blow in his life.

Ram Chand gathered all the strength and continued to extend his support to his family.He devoted his life to taking care of his family and hardly thought of his life but this had taken a huge toll on his health.

He is a priest and now he does small poojas to earn some money.

“I’m a very positive person, despite all the trauma I have never lost my confidence. I need to live for my family, friends and the community, my responsibilities and dreams are not over”

He has exhausted all his savings

Ram Chand is a priest and with a meager salary, and with this he supports his sisters and their children. Now he does small poojas to earn some money. His condition is deteriorating day by day but Ram Chand is more worried about the future of his family than his own life. His sisters are too old to donate the liver. They are looking for a donor. Unfortunately, he has a very short time in his hands, he needs to undergo a liver transplantation at the earliest, if not the chances of his survival is very less.His sisters are too old to donate the liver. Delay in transplantation can cost his life.

Apart from the small poojas that he does he has no other source of income. He has already spent Rs 5 lakhs for the treatment and he exhausted all his savings. The transplantation is estimated to cost over Rs. 28 lakhs.

He has gone through the worst in his life, he deserves a good health at least. Your contribution can save his life. 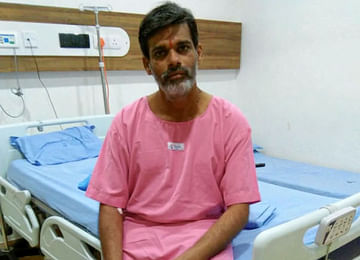 He is diagnosed with a chronic liver disease and needs a transplant to survive.