This Daily-Wage Worker's 9-year-old Is Battling Cancer, Needs Our Help To Save Him | Milaap
loans added to your basket
Total : 0
Pay Now

This Daily-Wage Worker's 9-year-old Is Battling Cancer, Needs Our Help To Save Him

“I get worried very easily when it comes to my children. A simple wound on his knee or even a fever makes me very anxious. This boy used to be so active and naughty, that watching him ill for all these months is killing me. When he is unable to go out and play, it makes me more restless than him,” says Dastagiri, whose 9-year-old son has been diagnosed with Cancer for almost 10 months now.

Little Prathap is a friendly, active kid. He cannot sit still for a moment, and is always up to some mischief or the other. He enjoys playing with his sisters and going out with his father, even to run errands.

Dastagiri’s weekly wages became too less for his family, overnight.

Prathap’s father Dastagiri is a daily wage worker in Kurnool, Andhra Pradesh. His weekly wage of Rs. 350 was ususally enough to make ends for his family. His mother Madhavi is a simple house-wife. Although little, their children are very understanding of the house-hold situation and stay very happy in the little they have. Today, the same income hardly is failing to keep the 9-year-old alive.

What looked like a simple food poisoning changed their life forever.

“I clearly remember the day he started vomiting every time he ate. It looked like he had eaten something outside, and I had blamed the street vendors he loved to eat from. Now, I wish it had only been a food poisoning. Life would have been very different today,”

What looked like a simple food poisoning, refused to subside. The fever stayed for over a week and the vomiting did not stop. Worried, the parents took him to a government hospital. A scan was recommended. When the results arrived, the doctors referred little Prathap to Narayana Hrudayalaya for specialized care.

Prathap was diagnosed with Cancer.

The report stated that the 9-year-old had Hodgkin’s Lymphoma, a dangerous type of Cancer. Helpless and with very limited resources, the parents started trying all that they could to save their little son. The family soon relocated to Bangalore, unable to bear the cost of travelling up and down to get him treated. They now live in a rented room in K R Puram.
Pratap, meanwhile is deteriorating day by day. He does not know he has Cancer. His parents do not know how to explain it to him, but his weakening body, and inability to play and run is frustrating him.
He has no idea he is inching closer to death every single day.

Dastagiri cannot even be with his ailing son.

With medical bills piling up, and no way to pay rent or feed his family, Dastagiri was forced to return to Kurnool to find work.

“No father should have to go through this pain. Rs. 350 a week does not suffice even for just the medical expenses. Feeding my family is also a challenge. Sometimes I feel my existence is of no good!”

Dastagiri spends most of his day wishing he could be by his son, and with his family in the most difficult time of their life.

Hodgkin’s Lymphoma has a prescribed treatment. Prathap still has a chance to live. He needs salvage chemotherapy followed by a bone-marrow transplant.
The procedure is estimated to cost Rs. 16 Lakh. With his wages and all the debts taken so far, this makes it almost impossible for Dastagiri to save his son. While his father is losing hope with every passing day, Prathap is waiting to become healthy again. He believes his father can protect him from anything, and lived. With your support however, little Prathap can still make it.
Supporting Document
The specifics of this case have been verified by the medical team at the concerned hospital. For any clarification on the treatment or associated costs, contact the campaign organizer or the medical team.
Click here to save Prathap 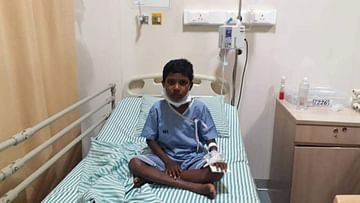 Dastagiri's weekly income of Rs. 350 is not enough to save his son

9-year-old Prathap has Cancer, and needs his father to be with him.