Middle Class Family Has No Help To Save Their 2-year-old Son From Dying Of Liver Failure | Milaap
loans added to your basket
Total : 0
Pay Now

Kalid weighs 5 kilos and he is 2 years old. He is surviving on 7 different medicines every day. Capsules, tablets, injections, and gels need to be measured. Even the slightest change in dose could kill him. His liver has completely failed. The vomiting makes it impossible for the medicines to take effect. Abdul has no time left to fund his son's liver transplant.

Baby Khalid has been in pain for 2 years

Soon after Khalid was born, he was kept under phototherapy for a week because he had jaundice. When his parents, Abdul and Raziya finally took him home, he seemed to be fine for a week after which his eyes and skin turned yellow. He had the Kasai procedure (removing blocked bile ducts) when he was just 3 months, unfortunately, it failed. His jaundice kept recurring. Since then he has been surviving only on medicines and he has hardly gained any weight.


Khalid with his father before the disease became worse

"Despite giving him all the medicines that the doctors prescribed, he got jaundice again. His urine is dark yellow and his stools are white. He also got hernia 4 days back, he is in unbearable pain. He cries every time he passes urine and stools." - Abdul

My 2-year-old is severely underweight, his condition is only getting worse

Raziya can't leave Baby Khalid alone for even a minute. She used to carry him till he fell asleep but now she is afraid to even touch him fearing that his swollen stomach would hurt him. He can only lie down in one position. He cries day and night and there is nothing that his parents can do to comfort him.


"It has been more than 2 weeks since he's eaten well. He's only 5 kgs now. That is how much a baby is supposed to weigh at 3 months, not 2 years. Although he's hungry, he can't eat anything without throwing up, no matter how well we mash the food." - Raziya.

I'm ready to donate my liver, but I can't afford the 22 lakhs needed for the transplant

Abdul works as a Senior Accountant in a private company. He earns Rs 50,000 per month with which he has to take care of his wife, 3 children, and his elderly parents. He has already spent 5 lakh from his savings and by borrowing from his friends. Every month he spends around Rs 15,000 for the medicines and tests alone. He has not been regular to work for the past two months because of the frequent hospital visits. He does not have money now even for the pre-transplantation tests.

"I'm donating my liver and I need to be on rest for 2 months after the surgery, the doctors said that post-transplant, he will need medicines which would costs Rs 20,000 per month till he recovers completely. My friends are helping me but it is not enough. Being middle class, we do not even qualify for any schemes. Crowdfunding is my only hope, please help me save my son." - Abdul.

2-year-old Khalid has severe liver disease. He is in constant pain and needs a liver transplant. His father is doing his best to save him but it is not enough. He needs your help to save his son. 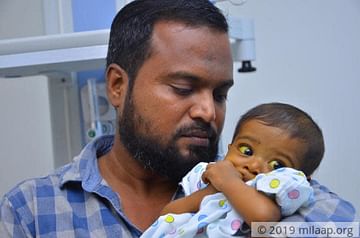 He Has Recurrent Jaundice Since His Birth, Now His Liver Is Fully Damaged

Baby Khalid needs a liver transplant at the earliest to survive.

UPI: givetoabdulaziz1@yesbankltd (Copy to clipboard)
Or
Click here to read the instructions before you make a bank transfer.