Shares
Shares
Share on whatsapp
Harini is a 9-year-old from Bangalore and is the only child of her parents. By the time her blood cancer was diagnosed, the disease had progressed. She needed immediate treatment to live. She is at present taking chemotherapy and her parents Manjunath and Jennifer need financial help continuing her treatment.

Manjunath is a taxi driver and Jennifer is a housewife. When Harini was born, together they decided that even if they were not rich, their child would want for nothing. “All our dreams for the future are in Harini. When the doctor said she needed to be admitted immediately or she would die – we felt like our world was shattered,” Manjunath explains.
Harini before she got sick
Harini had just finished class 3 and was spending her summer holidays at her grandmother's house. That was when she developed a fever that simply did not abate. Things escalated very fast and the diagnosis was made on April 18, 2017 – barely a month back.
The sudden diagnosis hit them out of the blue. “She was in her grandmother's house. We thought her fever was because of the change in water or the heat. But when we took a blood test, the doctor told us we had to go to a big hospital. We knew this wasn't normal,” says Manjunath.
Manjunath, Harini and Jennifer

They took her to HCG Hospital where the doctor told them in clear terms that if the treatment did not start immediately – Harini would not make it. She didn't have much time. Scared and worried, Manjunath admitted her to the hospital and asked the doctor to begin treatment. The family's ordeal had only started.

“Since the treatment my daughter's natural personality has disappeared”

Chemotherapy is a gruelling treatment – with a host of side effects. The treatment has taken a toll on the happy-go-lucky Harini. “She is acting completely unlike her. She used to talk so much. Now, she barely says a word. If one of us kisses her or tries to hug her – she screams out in pain,” says Manjunath.
Manjunath wonders if this treatment that has completely sucked the joy from his daughter is the right one. Despite his horror at what his daughter is going through – he knows that it is the only sure way she can get better. The treatment and side-effects are only going to intensify in the coming days. Manjunath is drawing support from the advise of his doctor.
Harini with her mother at the hospital

“The doctor told us to expect a change in her. He especially stressed that we must never get angry with her no matter how difficult she gets. The medicines put her in great pain and now she needs support and understanding. We are thankful for his words of advise. It helps us deal with Harini,” he explains.

His wife and he don't talk about it but just numbly go about their daily lives – doing what they need to do with a quiet desperation.

Diagnosed only towards the end of last month, Manjunath has not had the time to collect funds for the treatment. He is the sole earning member of the family. With a monthly salary of Rs 12,000 all his savings are already wiped out. Harini's treatment has just started and he needs some support to keep it going.
Help Manjunath and Jennifer save their only child and contribute to support them in getting Harini treatment.

Click here to make a contribution and save Harini
Donate 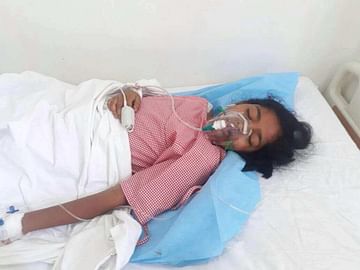