How Can I Afford His Life-Saving Treatment When I Can't Even Feed My Family? | Milaap
loans added to your basket
Total : 0
Pay Now

How Can I Afford His Life-Saving Treatment When I Can't Even Feed My Family?

Shares
Shares
Share on whatsapp
Gangadhar may be the youngest in his family, but he’s the bravest. Diagnosed with a severe blood disease, he remains positive through all the injections, medicines and pain. He believes that everything good will happen if he thinks positive. It is this undying spirit of this that has helped him so far, but Gangadhar’s (3) condition is getting worse.

“If you ask him if he’s in pain, he laughs and says it is nothing, and runs away. All he cares about is playing with his sisters and cycling…he’s only 3. He should not have to go through all this.” – Savita, mother

Gangadhar was diagnosed with Thalassemia Major three months back when a normal fever escalated. After a couple of blood transfusions, he still seemed to be weak and falling sick frequently. This raised all alarms and pushed Savita and Ramesh to take him to Mumbai, where his disease was diagnosed.

We are the reason that two of our children are diagnosed with Thalassemia. We wish we had known better.

Being the youngest of the four siblings, Gangadhar is pampered the most. Hence, when something happens to him, the entire family worries. Savita and Ramesh were still coming to terms with their son’s disease when they found out that their older daughter has Thalassemia minor.

“It’s our fault all of this is happening…they told us it is genetic. We wish we had known better. Gangadhar’s condition is serious, he needs a bone marrow transplant. Without this, he will need blood transfusions every other day. And that too can be a risk to his life later. All he thinks abouot is going home. Gangadhar is very close to his elder sisters. His day is incomplete when he doesn’t play with them. He’s feeling very homesick now.”

Gangadhar might never be able to go home without a bone marrow transplant. It is his only hope but his poor parents can’t afford it without your help.

His father, Ramesh works as a farmer in Parbani and along with the income he gets from driving cars it is barely enough to take care of his family. The estimated 10 lakhs for the transplant is an amount which he will not be able to afford. 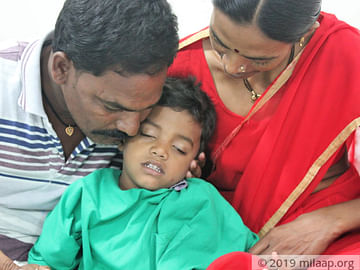 He May Be The Youngest, But He's The Bravest

UPI: givetomlpramesh8@yesbankltd (Copy to clipboard)
Or
Click here to read the instructions before you make a bank transfer.