You are sending a message to
Dolly
Go back

“For last month, we have been struggling to arrange money for my sister's treatment. We had to keep postponing the transplant even after selling everything of worth that we had. We cannot delay it any more. She is at the stage where without a transplant, she will simply die," says Ekta's elder sister, Sonu.

Ekta with her mother at the hospital

23-year-old Ekta has not had a good life. She was forced to drop out of college after class 12 because of bad health. In the following three years, Ekta had jaundice and tuberculosis, the consequences of each ailment more severe than the previous one. Her parents were well aware of Ekta's constant struggle with her health.

But despite everything, they weren't prepared for the news they on last year's Diwali. The doctors told them that their daughter's liver was completely damaged. She was put on an urgent transplant list due to the severity of her condition. It was made clear to the family that without a liver transplant, Ekta would not survive.


Ekta before she became sick

"Even if she had a minor fever, we took her to the best clinic in Delhi. We knew how much she struggled and wanted to do everything to aid her fight. Little did we know, that it would all be for nothing and Ekta would still end up fighting for her life," said Sonu.

An Expensive Road To Recovery

The cause of her sudden liver damage is hard to pinpoint, according to Sonu. Maybe it was a treatment gone wrong, or maybe it was always the reason for Ekta's multiple health concerns. All the family wants is to make sure Ekta gets another chance at life.

"We are trying to save every single paisa, but the amount is just too big. We have already spent so much on treatment. Also, due to her liver, she has to go to the hospital every other day because of some complication or another. Recently, since she was sick, we took her to a hospital in Delhi. After a few days, she was discharged. We brought her home that night and next morning, she had to be rushed to the hospital again as her condition yet again became critical," explains Sonu.

Ekta and her family lives in Delhi. Her parents never had a lot of money but it was never a concern till the liver damage. Her father is a tailor and he had to leave his job because of joint pain. Her mother looks after the entire family by cooking in multiple houses. She makes Rs 6,000 per month, depending on the availability of jobs. Ekta's 27-year-old sister, Sonu organizes small events and earns a bit more. Her other two younger siblings are still in school and college.

"Even or relatives have the same financial condition. Really, there is no one to ask for funds. Who will give us this much money?" said Sonu.

Ekta condition is so bad that if she doesn't have a transplant at the earliest, she will not survive. She has put up a brave fight so far but now needs our help. She just turned 23 and has her entire life in front of her. The estimated cost of her liver transplant is Rs 22 lakhs. Either one of her siblings is willing to be a donor. The family is finding it difficult to arrange for the funds, and are looking for monetary help from wherever they can manage. 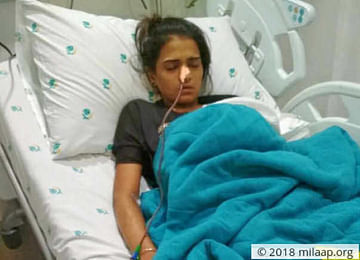