He Was There For Her When Her Parents Abandoned Her, Now She Struggles To Save Him | Milaap
loans added to your basket
Total : 0
Pay Now

JK
You are sending a message to
Janhavi Khanna
Go back

He Was There For Her When Her Parents Abandoned Her, Now She Struggles To Save Him

“They say God can’t be there for everyone at all times, that’s why he sends parents. In my case, it was my uncle. He has always been my pillar of strength. My father never wanted a girl child, he abandoned my mother just after I was born. My mother didn’t want me because I reminded her of her husband. It was my uncle who brought me up with love and care. Now it’s my turn to do something for him...” - 20-year-old Janhavi controls her tears as she tells this.

Dilip, her uncle, is battling a severe medical condition. He needs urgent medical treatment but the cost is too steep for them to afford it.

One by one his organs are giving up on him

The last two years haven’t been anything less than a nightmare for the Kohli family. One after the other, Dilip has been going through medical emergencies.

Dilip with his wife, Sonia

“A small cut in his left toe turned into gangrene (dead tissue caused by an infection or lack of blood flow). They had to chop off two fingers! But no, that wasn’t the end of it. His heart started getting worse all of a sudden and then his kidneys failed. It is as if someone had cursed our family,”- Sonia, wife.

Now his lungs are also not working properly. He needs to be constantly on oxygen machine. He is at home, under strict supervision but his condition is very delicate. The family is always living in the fear that he might be required to be rushed to the hospital.

He is angry, frustrated and hates being tied to his wheelchair

Dilip hasn’t been able to go to work since his fingers got amputated. He has been shuttling between home and hospital for the last two years. He has been dependent on his wife and children for everything.

An old pic of Janhavi and Dilip

“And he hates that! He has always been a very independent person. Helping others, running errands and now he can’t even go to the bathroom on his own. He behaves like a kid, he craves for spicy food despite knowing that we can’t give him that. He gets angry, sometimes even breaks down - I feel bad, but I have to be strict with him. He is all we have got,” - Janhavi.

Janhavi and his cousin, Manas have started working at just 20 to support Sonia who works at a call centre. They want to do everything in their hands to save Dilip.
They have sold their house and have spent over 40 lakhs. But even then they are falling short of the daily expenses. The only they can save Dilip is with your help - a small contribution will go a long way 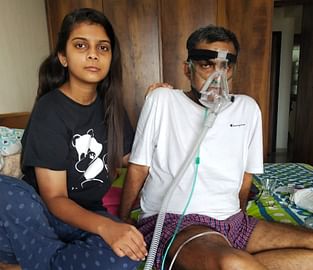 They have sold their house but even then can't afford the treatment, you can help