Class 9 Boy Lost His Hands And Leg After A Train Ran Over Him, Needs Urgent Help To Live | Milaap
loans added to your basket
Total : 0
Pay Now

VG
You are sending a message to
Vinit Gupta
Go back

Class 9 Boy Lost His Hands And Leg After A Train Ran Over Him, Needs Urgent Help To Live

“A train engine ran over my son’s body and he has lost three of his limbs - only his left leg is intact. I sit beside him, trying to console him but I fail. Tears roll down my eyes as I look at him lying him like this but he is hopeful. He says he will be fine. I have no other reason to live now. I am living to fulfil his dreams of having a better life. But I can’t do this alone, I need your help,” - Vinit Kumar, father of 14-year-old Devansh.

A near-fatal accident has changed the life of this teenager forever - he only has one limb intact now and needs to undergo treatment at the earliest to live.

On his way home from school, Devansh has to cross a railway track. It’s not the first time that he was doing this but on that day, something went amiss. He tripped and fell on the tracks and the right sling of his bag got stuck. He was trying to wriggle out when a train engine came from the other side. Devansh was terrified and couldn’t move his body - the engine ran over him. People around quickly rushed to his help.

“When I saw him on the hospital bed with his hands cut up to his elbows and his right leg only till his thighs, I ran out crying. I used to always drop him off to school and even bring him home on my scooter. It was just that day when I didn’t go with him and now I will regret this for my whole life,” - Priyanka, mother.

Devansh has already had two surgeries and has been in the ICU for more than 20 days. The effect of the sedatives are wearing out and the boy is now forced to face the truth.

“He didn’t speak for 2 days after he looked at his hands and legs. But after that, he has always put up a brave front. He doesn’t shed even a single drop of tear in front of us. But there are nights when I catch him staring at the ceiling, his eyes welling up. I try talking to him about other things but I know he is scared. I feel helpless, thinking I have nothing to console him with,” - Vinit.

I am only a cab driver, there is no way I can save my son without your help

Vinit is a Uber cab driver and doesn’t make much. The parents are desperate to save their son - they have used their savings, borrowed from relatives. But there is no way they can arrange for 35 lakhs.

“It has only been a few days since I have started going to work. But I can’t work like before, my mind goes back to my son. I come back early and be with him, feeding him, helping him change his clothes. Devansh’s school friends have come forward and helped us with some money but nothing is enough. I want my son to get better soon. I want him to have a fruitful life ,despite the accident. Without your help, I will fail him.” 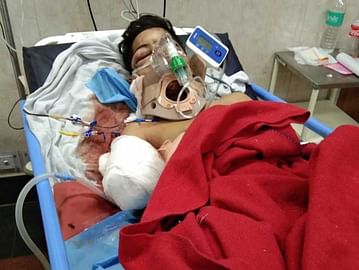 UPI: rzpy.givetomlpvinitkum003@hdfcbank (Copy to clipboard)
Or
Click here to read the instructions before you make a bank transfer.