This Mother Is Fighting To Save Her 10-Month-Old Who's Been Unconscious Since 4 Days | Milaap
loans added to your basket
Total : 0
Pay Now

“When my 10-month-old son was undergoing tests four days ago, he had cardiac arrest. We were told that his heart stopped beating for two long minutes. Fortunately, the doctors have saved him but he did not open his eyes yet and there is no movement in his body too,” - Kavitha.

Chinnu is admitted in the PICU care. His condition is critical and without the support of the ventilators he cannot breathe. But, his poor parents have nothing left in their hands to continue his treatment. Without this, he may never open his eyes.

‘My little son was bleeding profusely’

Like every morning, Kavitha was preparing her son for a bath. But, she panicked when she saw his diaper filled with blood instead of stools. They rushed him to a local doctor who gave medicines to cure. But on the same day afternoon, he passed clumps of blood. Shivudu and Kavitha feared for his life and rushed him to Hyderabad.


“The doctors thought he had infection and treated him for the same for five days. Everything seemed fine until he pooped blood again the day he was about to discharge, Every time he pooped, he was losing good amount of blood,” - Kavitha.

When he was undergoing tests he experienced a life-threatening event, since then he never opened his eyes. And, he was diagnosed with lower gastrointestinal bleed, a condition that causes bleeding in the intestine. He underwent a surgery that sopped his bleeding but he still remains unconscious. Only with the help of continued treatment and urgent laparotomy surgery doctors will be able to diagnose Chinnu’s problem and save him.


“My son is battling for his life with an unknown disease. He underwent many tests and yet nothing came into light. We are allowed to visit him only twice a day. Whenever we see him my wife calls out his name in a hope that he opens his eyes, no matter how much I try to console her, she cries uncontrollably," - Shivudu.

'Our house was filled with his laughter'

“Our little one loved listening to rhymes, so I used to play all his favourites on Youtube and this was the only way I was able to cook. He is a very naughty child and demands our attention throughout the day. When his father comes in the evening, he plays with him. He loves to be tickled and I have never seen any kid laugh out so loudly and heartily. But now, he is motionless in intensive care fighting for his life,” - Kavitha.

This school teacher with no savings cannot save his only son

Shivudu is a school teacher in Bollaram village, Telangana. Being the sole bread earner of the family, he spends his income of Rs 7,000 only to run the house. With zero savings, he was not able to even admit his son in the hospital. He borrowed around 6 lakhs which helped him to admit his child in the PICU and afford a surgery. But he has exhausted his money and has nothing left in his pocket to continue the life-saving treatment and a surgery which costs 6 lakhs. Only with the help of the strangers he can save his only son.


"Our lives have drastically changed in a few hours and I have never imagined to see this kind of day in my life. I was not prepared and in this short duration I am not able find help. I love my son and I cannot imagine my life without him, please help me," - Shivudu.

Little Chinnu is fighting hard for his life and his parents are desperately looking for help to save their son. Your kind contribution can save Chinnu’s life. 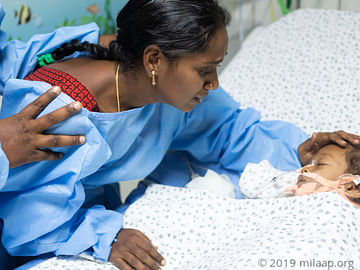 Without PICU care Chinnu may never open his eyes

UPI: givetoshivudufunds1@yesbankltd (Copy to clipboard)
Or
Click here to read the instructions before you make a bank transfer.