Help This Boy Who Reminds His Father To Take Him To The Hospital For New Blood Every 12 Days | Milaap
loans added to your basket
Total : 0
Pay Now

MS
You are sending a message to
Milap Singh
Go back

“Whenever it is time for a blood transfusion, he comes to us and says, ‘Shall we go to the hospital? It is time for new blood.’ Hearing him say such things, Ashita also starts asking him after he’s back from a transfusion, ‘Did you get new blood?’ Seeing their innocence and lack of understanding of how critical this is, makes us cry.” - Chandra

Animesh is the first child of Chandra and Milap Singh. She fondly recalls how it was the best day of their lives when they had their first child. They were thanking their stars for a healthy baby and had so many plans for his life. But all that was about change forever, in 6 months.

When he fell sick medicines didn't work on him

When Animesh was just 6 months old, he got a high fever that just wouldn’t go. His body temperature would sometimes go up to 105 degrees. His parents would helplessly cry looking at their little boy gasping for breath and suffering because no medication worked on him. Then he started dehydrating badly because of chronic diarrhea. His loose motions continued for days on end, along with the fever and no doctor could help them.


“Day by day we saw our baby slip away. His skin would be so hot that we were afraid to touch him, and the loose motions wouldn’t stop, no matter how many medicines we gave him. Slowly we started noticing that his palms and soles started turning pale. Babies should have pink palms and feet, that’s when we knew, his problem was way bigger than fever and diarrhoea.”

They sought help from every doctor in Bhopal

What followed was weeks of doctor visits. They didn’t leave out a single doctor in the city, who had the slightest chance of helping them understand and cure their baby. All they kept doing was prescribe iron supplements, which offered no relief to Animesh. Finally, one of the doctors ran the blood tests for Thalassemia, and diagnosed him with Thalassemia major.

“We didn’t even know such a disease existed, we didn’t understand it. He told us that just like a vehicle needs to be filled with petrol again and again to keep running, our baby would need blood to stay alive. If the transfusions stop, his body will stop too, just like a car will stop if you stop filling petrol in the tank. It broke our hearts to sit there and listen to that.”

They could not believe their son had a life-threatening disease

Chandra and Milap’s lives had changed for good. Their son had a deadly disease that was killing him. They still had hopes that there would be a quick and permanent cure for his condition. Hence they kept going to more doctors, but slowly there hopes were fading.

“When we told a doctor about his constant fevers after showing him the reports, he started yelling at us saying, ‘He has thalassemia, he will get fevers lifelong, if you don’t treat him right.’ Hearing him put the truth so bluntly, we broke down. I guess we were in denial till then.”

Immediately after that, Animesh’s blood transfusions started. Every 12 days, he needs a blood transfusion to stay alive. Despite years of taking regular transfusions, his condition is still worsening and the doctors have told that only a bone marrow transplant will help him recover.

Animesh has a donor but his parents can't afford the treatment

Luckily for Animesh, his little sister Ashita is a 100% match. She is 4 years old and even to her, the hospital visits are a normal part of life.

Although they have their daughter for the donor, they are struggling to fund his treatment. Milap Singh works as a machine operator at a factory for a minimum wage and they live hand to mouth due to the heavy expenditures they have to deal with. They have already spent lakhs on his treatment and do not have Rs. 14 lakhs for the transplant. All their savings have been exhausted and they don’t have any money left. If Animesh does not get a bone marrow transplant in time, he will not make it.

Please help his parents by contributing to his treatment. 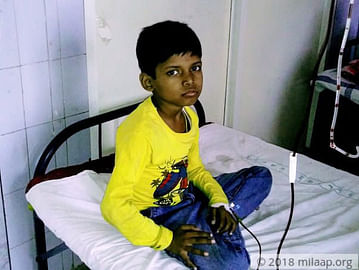 Except Money, They Have Everything Needed To Free Animesh From Pain

Animesh can survive if he gets a bone marrow transplant. His parents need your help to save him.

UPI: givetomilap@yesbankltd (Copy to clipboard)
Or
Click here to read the instructions before you make a bank transfer.