This 6-Year-Old Can Slip Into A Coma If He Doesn't Get An Urgent Liver Transplant | Milaap
loans added to your basket
Total : 0
Pay Now

S
You are sending a message to
Sachin
Go back

“In just 2 weeks, Bhuvan has gone from a normal and happy kid to being extremely critical. If he doesn’t undergo a liver transplant soon, the doctors said that his brain could be damaged and he can slip into a coma. He can’t stop crying because he’s scared and in so much pain. I’m terrified too – I have no idea how to save my son’s life because I have nothing. This has been the hardest 2 weeks of our lives.” – Padma, mother

Bhuvan Is In The PICU Since A Week

“He used to play so much and go to school as well. But just 2 weeks ago, he vomited multiple times daily. All of a sudden, we noticed that his eyes became yellow. It was so horrifying because we’ve never seen this anywhere. We rushed him to the hospital and we were told that he has jaundice and his condition is deteriorating very fast. My wife, Padma and I are just shaken because we don’t know how a 6-year-old child can get so critical so fast. It’s heart breaking” – Jagadeeswara, father

Bhuvan's liver is completely damaged now. His swollen tummy is hurting him and his eyes and skin are becoming yellower by the hour. He had to be shifted to the PICU for life-support. A financially exhaustive liver transplant is his only hope of survival, but his parents are very poor.

His Parents Are Racing Against Time To Get Help

“As a labourer in a factory, I just earn Rs. 10,000 a month. I had savings of Rs. 60,000 but Bhuvan’s hospital bills for the past 2 weeks swept all of that away. How can I afford this transplant which costs around Rs. 15 lakhs? It’s just so daunting and scary. He’s already critical and his condition can become worse any time. Padma can’t stop crying and it’s very hard for me to not shed tears too in front of him but I control because I don’t want him to be depressed.”  - Jagadeeswara

Even if Bhuvan gets a transplant, he still has to remain in the hospital for a few weeks to recover. Jagadeeswara has nothing left and he and his wife, Padma have a 5-month-old baby too – who they need to take care of and provide for as well. Being the sole breadwinner of the family, Jagadeeswara sends money to his old parents back in their village too. He is in urgent need of your help to save his son.

“We hardly get to see him in the PICU. He too, can’t stop crying because he’s shocked and scared as he needs to be checked for every little thing. He’s terrified and in so much pain. I don’t want to lose my son. Your help would mean so much to us. I want to give him a new life by donating a part of my liver.” 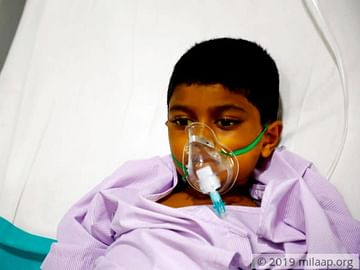 His Parents Are Racing Against Time To Get Help

Bhuvan needs a liver transplant at the earliest to survive. You can help save him.