These Parents Have Not The Left The Hospital In A Month To Try And Save Their 3-Month-Old | Milaap
loans added to your basket
Total : 0
Pay Now

Shares
Shares
Share on whatsapp
For nearly one month now, the waiting room of the hospital has been Srinivas and Anusha’s home. However, they believe that their struggle is nothing compared to their 3-month-old’s – he’s fighting for his life in the ICU and wakes up to the sounds of the beeping machines instead of their voices. Srinivas and Anusha have done everything to try and continue their baby’s treatment.

“We sleep on the floor of the hospital, we can’t afford to travel back and forth from home and we can’t leave our only child alone here. We will only go home with our baby, but we have nothing left to save him.” – Srinivas, father

Seconds after he was born, he struggled to breathe

Anusha can’t help but think about the day of her delivery. It was the 7th month of her pregnancy, and just before Srinivas left for work, she had a shooting pain in her stomach. She immediately knew something was wrong.

“We took an auto to the nearby hospital. They told me I had to deliver the baby soon. As soon as he was born, he struggled to breathe.” – Anusha, mother

Srinivas and Anusha’s baby boy was rushed to a hospital with an NICU facility. They soon found out that their baby has a heart condition that was causing an obstruction to the food pipe.

The helpless parents can see him only once a day

On 12 March, the baby boy underwent a surgery for his condition. However, he soon developed respiratory distress. He has been admitted in the ICU with oxygen support ever since.

“We get to see him only once a day for a few minutes. We can only hold his little hands, but not for long. He’s vulnerable to infections. He can’t breathe on his own yet.” - Anusha

They’ve sold everything they had to continue his treatment, now they are helpless

Srinivas works as an attendant in a school in Hyderabad. He earns Rs. 11,000 per month. To start his baby’s treatment, he had to sell the only property they owned – a small flat they owned, the only financial security they had. He has spent nearly 7 lakhs till now, and can’t afford any more on no income.

“I haven’t been able to go for work for nearly a month now. I won’t be able to go for the next few weeks because my baby still needs to stay in the ICU.” – Srinivas

Srinivas and Anusha long to take their baby back home with them, but they have nothing left to afford the treatment he needs. Their baby boy needs to stay in the ICU for longer to recover. You can help save him.

Click here to save Srinivas and Anusha's baby
Donate 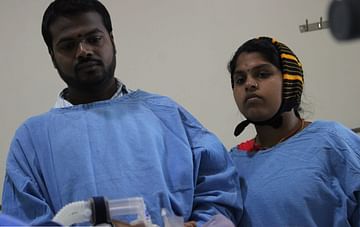 Seconds After He Was Born, He Struggled To Breathe

Srinivas and Anusha's baby needs to stay in the ICU longer to survive.