“Every night I have to rock him for hours before he will stop crying and fall asleep. But even after I lay him on the bed, my worries do not stop – my baby boy’s oxygen levels can drop any minute and my husband and I have to watch him all night, without getting a wink of sleep. If we fall asleep and something bad happens to our baby, how will we forgive ourselves?”-Rachna, mother.

Rachna and Amit’s 3-month-old baby boy has a severe heart condition due to which oxygen circulation in his body is extremely low. Instead of 100, it is always below 85 – and can dip even lower if not monitored properly. Amit had to rent a portable oxygen cylinder and a device to read the oxygen levels of his baby’s body (pulse oximeter). Every time the baby turns breathless, they have to connect the oxygen cylinder via a tube to the baby’s nose so that he does not suffocate to death. However, this is not a permanent solution for his troubles – he needs an urgent heart surgery but it is completely beyond Amit’s reach.

‘Right after he was born, he was taken straight to the ICU instead of my longing arms’

Rachna went through a very painful, 8-hour-long labor before giving birth to her sweet son. But before she could even catch a glimpse of him, he was whisked away to the ICU. She was weak and losing consciousness due to ample loss of blood, but kept asking the nurses, “Where is my son?” The baby was kept under observation in the ICU as he had difficulty breathing.

After a few hours, Amit and Rachna were told that their baby was diagnosed with a congenital heart disorder in which the veins bringing blood back from the lungs don’t connect to the left upper chamber of the heart like they’re supposed to. Instead, they go to the heart by way of an abnormal ‘hole’. This causes mixing of good blood and bad blood, leading to very low levels of oxygen in the baby’s blood.

Ask anyone in their lane in Ghaziabad where Amit and Rachna’s house is and they would tell you promptly: it is the house in which a baby’s loud cries can be heard. Rachna cannot lay her baby down on the bed or even let her husband carry him for more than a few minutes before he starts bawling.


“As a result of his failing heart, the baby gets cold and chest congestion almost every week. We have to run to the hospital very time he turns blue from becoming breathless. The congestion makes it much worse. No medicines are helping him now. The surgery is the only way his troubles can go,”-Rachna

These parents cannot save their son without your help

“Since his diagnosis, doctors have been waiting for him to put on weight in order to prep for surgery. But he was not growing well until recently. Now that he is of the ideal weight, we don’t have the money required for the surgery,”-Amit

Amit works as a marketing executive in a small company based in Delhi, earning Rs 14,000 a month. But the oxygen cylinder that he has rented for his son itself costs Rs 8,000 a month. Add to that the costs of medicines and weekly admission charges, he is spending all his monthly salary to keep his baby alive. He does not have the means to arrange the lakhs needed for the surgery and needs your help.

Time is running out for this sweet baby. His oxygen levels are at an all-time low and only your kind contribution can help him get a life-saving surgery. 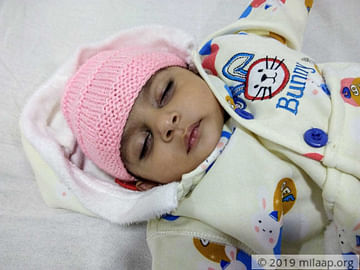 This Baby Is Living On Borrowed Time, He Needs Help Urgently

The oxygen cylinder cannot prolong his life for long. This baby needs an urgent surgery to survive