This Mother Has Not Gone Home In 1 Month, Waiting In The NICU For Her Newborn To Make It | Milaap
loans added to your basket
Total : 0
Pay Now

a
You are sending a message to
aman_hospital
Go back

This Mother Has Not Gone Home In 1 Month, Waiting In The NICU For Her Newborn To Make It

“She barely eats, barely talks. Every waking moment she just sits by our daughter’s side.” – Akeel, speaking of Ruby

Three weeks ago, Akeel and Ruby were at a market looking through some baby clothes, when all of a sudden Ruby started going into labour. Akeel hadn’t known what to think as he rushed his wife to the hospital; Ruby was only 7 months pregnant at the time. When they reached the hospital, the doctors quickly realized that the mother and baby were both at risk, and that she would have to deliver the baby to save their lives.

“I was so scared. I thought I might lose both of them in one day. I just kept praying to god: please, don’t take my wife and child away from me, I don’t know what I’ll do if I lose them… Please, god… Please…” – Akeel

The doctors were able to save the lives of both mother and child, but having been born at just 28 weeks, Akeel and Ruby’s daughter is extremely premature. Her internal organs and systems are severely underdeveloped, and her life hangs by a thread. She has respiratory issues, immunity issues, and heart problems, to name a few, and has been on constant life support in the NICU from the moment she was born.

The 8 days it took for Ruby to recover from her surgery were agony for her. As soon as she could get out of her bed, she rushed to her baby’s side… and she hasn’t moved from there since.


“She just cannot bear the thought that we might lose our little one. She talks to her a lot, telling her everything will be fine, that she’ll grow to be big and strong one day. It breaks my heart, because… because I can’t afford the cost of keeping our baby on life support anymore. I’m just a tailor. What money I had saved up I’d had to spend on the surgery. I have nothing left now. And because of that our baby is going to die…” – Akeel

Akeel is at his wits’ end. He has tried begging everyone he knows for money, and has borrowed as much as he can. But it’s not enough. You are now the only salvation for this distraught mother, this heartbroken father, and this dying child. 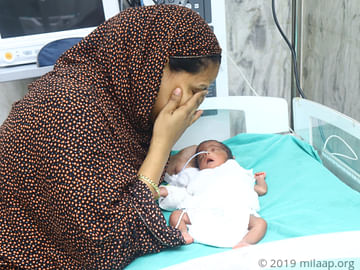 She just wants her daughter to be okay

They can't afford life support for their child. You can help.