Shares
Shares
Share on whatsapp
Baby Muhammed Sardar, a 2-month-old baby boy, lies in the NICU with ventilator support and tubes all around him. His tiny body is eerily still, except for his eyes that often flutter half-open. A nurse keeps covering his eyes with cotton to protect it from the light.

"She's worried he will go blind. I am worried he won't survive." - Ranjan (Raju) Sardar  (Father)

“I’m just not able to accept that the life that I carried inside me so carefully for 9 months is now in danger. The last 22 days have been the darkest. My 2-month-old son has been lying motionless and is in a critical stage. Just a month before, I was enjoying motherhood, holding him in my arms all the time. Now, he is not responding to my touch or my cries.”- Sabina, Mother

He went from the cradle to the ICU in 30 days

Less than a month ago, baby Muhammed was admitted to a clinic following high fever and cough. The parents did not worry as they thought it could be a common infection. Muhammed was treated with regular medication and was sent home. However, after a week, the baby was shifted to a hospital in Ananthpur district, Andhra Pradesh, due to breathing difficulty.

“It was midnight and I had just fed him milk and he was sleeping. Suddenly, he started breathing heavily and it was clear that he was having difficulty taking in the air. I was really scared and called my husband. Together, we took him to the hospital.  There they said his condition is very critical. I could feel my life falling apart at that moment.” -Sabina, Mother

Baby Muhammed has been diagnosed with cardiogenic shock and multi-organ failure.

The parents had to shift their baby from Ananthpur to Bangalore for the required medical facilities. The doctors have said that Muhammed can survive with proper treatment and continued ventilator support. The cost of the treatment is expected to be around 7-8 Lakh Rupees.

“I have already spent my savings amount which was close to 1 Lakh Rupees for the initial treatment in the first week and to shift our baby from Ananthpur to Bangalore. We had to travel by ambulance all the way from there as our baby was critical. The hours inside the ambulance were miserable. My son was lying motionless and my wife was crying the entire time.” – Raju

Raju and Sabina are handloom weavers. They weave fabrics by hand and earn an income of 20,000 per month working together. Their income is hardly enough to support their family and educate their eldest daughter who is 4 years old and is currently being cared for by their neighbor. They have already spent their savings and are now without any money or support to continue their son’s treatment.

Ranjan Sardar begs for your help to save his little son. Your contribution can bring back the happiness that these poor parents have lost. 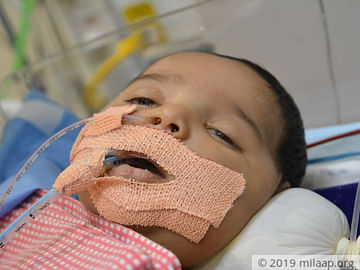 From Cradle To The ICU In 30 Days

He is completely unconscious and motionless, and his parents cry for help.