You are sending a message to
somnath ghatte
Go back

Shares
Shares
Share on whatsapp
The youngest of three children, Avani was a happy and healthy child until last year. Last October, 4-year-old Avani suddenly began complaining of severe stomach ache which wouldn’t go away. To her parents horror, their little baby had stage 4 cancer. Now she needs chemotherapy once in 6 hours just to keep cancer at bay. To be truly cured she needs a bone marrow transplant.


Little Avani's waiting to get better and go home

Stomach ache turned out to be something least expected

Somnath Ghatte, Avani’s father took her to Tata Hospital, Mumbai. The tests and biopsy carried out there gave Somnath crushing news. Avani had high risk neuroblastoma, fourth stage. Neuroblastoma is a cancer of the nerve tissues.

Since December, 2017, Avani has been receiving chemotherapy for three months. However, at the end of three months there was only a 20% chance of recovery. This was disheartening news for the family. Now, the only solution to save her life is a bone marrow transplant.

“The treatment is killing her childhood. She keeps vomiting and is feverish all the time. Over the past seven months, she has lost a lot of weight. She itches so much that sometimes she starts to bleed. Chemo has made her bald so she cries unstoppably whenever she accidentally sees a mirror.” -Somnath

Somnath has spent over Rs 5 lakhs for Avani’s chemotherapy, radiation and medications. However, it is no longer enough to help Avani and only helps in keeping her alive. Emotionally and financially drained, Somnath's only hope now is a bone-marrow transplant.

Somnath and Anuja (Avani’s parents), have left their son, Sanket (13) and daughter Aishwarya (10) back home in Solapur. The expense of Avani's treatment is so high, that even paying for the education of his other two children is impossible for Somnath.


“It is difficult for my aged mother to take care of my other two children on her own. But, we can’t bring them here. It is impossible for us to stay in Mumbai and bear all the expenses. My children in Solapur are being forced to grow up on their own at a age when they need us most."

Avani is already taking chemotherapy to prepare for a bone marrow transplant. The transplant needs to be done urgently. She has been admitted to the hospital and the process of harvesting stem cells has also been done. She needs chemotherapy for a few more days before the transplant is done.

Chemotherapy is not a permanent solution

“My little girl has not even seen the world, we can’t leave her to die. Doctors tell us she has a very strong will to live. Chemo is not a permanent solution. I have to get the permanent solution and I will take efforts till my last breath to save her from cancer.”

Chemotherapy has made Avani so weak that she cannot even eat. She refuses to eat food even if it will make her feel better. Also, her chemotherapy was stopped due to extreme itching - which rapidly worsened the cancer. Nothing other than a bone marrow transplant will help Avani now.

Little Avani will be able to live only if the transplantation is done as soon as possible. The cost of the procedure is high, and Somnath does not have the time to arrange for funds. He has also used up his medical insurance that covered his family. But it covers a small part of the expense only.

Somnath’s happy life turned upside down because of one stomach ache that Avani had. Her situation has become so critical now that she takes chemotherapy every six hours. Her father has nothing left to save her except his determination. Only your support can save Avani’s life. 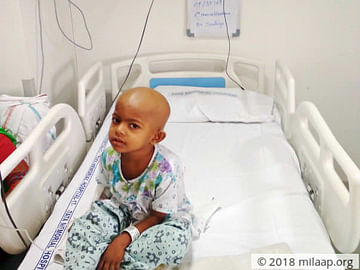 Only a bone marrow transplant can save 4-year-old Avani which her parents can't afford.