This Mother Has Seen Her Son On The Verge Of Death Twice Because Of Cancer | Milaap
loans added to your basket
Total : 0
Pay Now

You are sending a message to
Deepali Patil
Go back

“Just 2 weeks ago, we thought we’d lose Arha because he was just so weak and pale. I still feel like that every day, like we could lose him at any minute. He couldn’t even get up on his feet or open his eyes. After 1 whole year of chemo, it was horrifying to see him relapse, even his eyes started to squint and he got a severe blood infection too. The blood cancer has been brutal but at such a young age, he’s fighting like a soldier – so how can we give up?” – Himshree, Arha’s mother

3-year-old Arha bravely fought a deadly form of blood cancer and after a year of treatment, he was finally on his way to recovery this January. But unfortunately in March, Arha relapsed and his condition has progressively worsened in just a few months.

If you had seen him 2 weeks ago, you'd know why I thought we'd lose him

“He was so critical that he had no energy to even talk. At this age he needed an MRI too. He’s just 3. He started vomiting frequently, developed mouth ulcers, and couldn’t drink anything. His throat had swelled up too and he had to undergo an operation too. If you would’ve seen him 2 weeks ago – you’d know why I thought that we’d lose him. It was the most frightening period.” – Himshree

Despite all the setbacks, Arha has still fought and in the past 2 weeks, he’s managed to get up and walk around a bit too. But, the blood cancer is still here to stay. He is under the constant threat of contracting life-threatening infections because his immunity is very low. He needs to undergo a bone marrow transplant as soon as possible otherwise he might not be able to make it for long.


How can a healthy baby suddenly get cancer?

“Arha has always been very energetic. Until he was 2, there were days that he’d play so much that he was out of control. But all of a sudden, in the beginning of last year, he just wouldn’t move for hours, he stopped eating and just looked so weak. When he was diagnosed with blood cancer, he was in a terrible state – his hemoglobin count was around 3 and his heart was beating so hard. His skin was so pale and I thought he wouldn’t make it through the night. We were still shocked and in denial – how can a healthy baby suddenly get cancer?” – Himshree

From banks, friends and family, they’ve borrowed all they could and now are out of resources to help save Arha. After he relapsed, Himshree and Amit have already spent over Rs. 5 lakhs in just 2 months. Arha’s condition isn’t improving and his only way out is bone marrow transplant as soon as possible but it costs over Rs. 25 lakhs!


“We have no savings to pay so much. It would just mean a lot if we could receive any help to save Arha. I don’t want to live in the constant fear of losing him, that’s the worse for any mother. The smallest contribution will provide immense strength to our fight in giving Arha his new normal life.”  - Himshree

He cannot survive without an immediate bone marrow transplant but his parents, Himshree and Amit, who’ve borrowed and spent over Rs. 30 lakhs on his treatments already, are in need of help to save their baby. 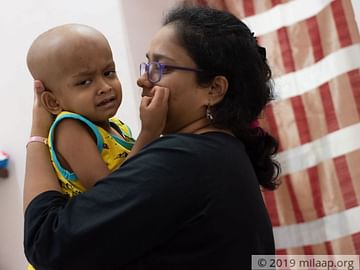 Arha needs a bone marrow transplant at the earliest to survive.

UPI: rzpy.givetomlpan000000016@hdfcbank (Copy to clipboard)
Or
Click here to read the instructions before you make a bank transfer.