Shares
Shares
Share on whatsapp
11-year-old Aparna always avoided outdoors and making friends because she felt too tired and weak to play. She put her heart into studies and never told her parents about her real problem. Right when her father was struggling to afford the surgery that could save her life, Aparna had a brain hemorrhage. With her body not making enough blood cells, her life is in grave danger.
Jayaprakash is a rural school teacher. He was proud of his daughter and he believed that she had an unusual love for studying. She preferred books over friends. It did not seem strange to this teacher. The parents thought it was good for her, especially because she would get terrible injuries whenever she played. A small bruise would take weeks to heal or turn into a huge black patch. Only when the injuries got worse, Jayaprakash realized the truth.

“I didn't realize she was actually too weak to play. She was studying to avoid playing."

Panic crept in when Aparna fainted
On July 28, as Aparna was getting ready for school, she fainted in the bathroom. Terrified, her parents rushed her to a local hospital. Tests revealed that her blood count was abnormal. She needed a transfusion. The doctor referred them to Manipal for further treatment.

"We discovered she has severe aplastic anemia. Her body is slowing not producing blood cells. She is not clotting. Her hemoglobin is also low. She's probably had it all her life. I feel so guilty for not even noticing!"

Had there been any delay, they would have lost her

Ever since she was diagnosed, Aparna has been getting blood transfusions. However, it is not the solution. It is just keeping her alive for now. The delay in diagnosis has put Aparna in a critical condition. Her body has now stopped making blood. Her only chance for survival is a bone marrow transplant.

“The guilt is killing me. I wish I had taken her weakness seriously. I wish I had done something about it before. Now, my little daughter must go through so much pain. I cannot stand seeing her in this state,”

Brain hemorrhage put her in the BMT unit

Aparna was positive about her treatment and the outcome. She was consoling her parents, and her smile gave them hope. They were anxious about having to arrange Rs. 20 lakhs on a very low salary. Right when they were asking around for help, this little girl had a brain hemorrhage.
"Now we have no time to waste. She is in the bone marrow transplant unit. It is now or never. We have to raise Rs. 20 lakhs for her transplant soon otherwise we will lose her."
With some support from us, Aparna can survive this terrible situation.
Supporting document:
The specifics of this case have been verified by the medical team at the concerned hospital. For any clarification on the treatment or associated costs, contact the campaign organizer or the medical team. 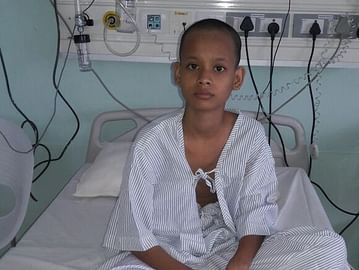 Help Aparna Get An Emergency Surgery

Aparna's parents are unable to afford the surgery that can save her life.