This IIT-Aspirant’s Hopes And Dreams Will Be Crushed By Cancer Without Urgent Help | Milaap
loans added to your basket
Total : 0
Pay Now

s
You are sending a message to
shamimk0002
Go back

Shares
Shares
Share on whatsapp
During the week in March when most teenagers his age were dealing with mock exams for their 11th Standard finals, young Alqab was dealing with pain instead. It had started as a faint ache in his left hip, but it got worse with each passing day. His father, Amin, had taken young Alqab to a doctor, who gave him some medication, but it had done nothing to help.

When the time came, Alqab ignored the pain and appeared for the exams anyway. He didn’t want to risk his future. He would be applying for an IIT seat after all, in just one year, and didn’t want to create the wrong impression by missing any of his exams.

But soon, the pain could not be ignored anymore.

Over the next few months, Amin dutifully took his son to a string of doctors. They went to general physicians, bone doctors, neurologists and more, who all recommended various tests and medical treatments, to understand and then cure the condition that poor Alqab was suffering from. But all along young Alqab’s pain kept getting worse. It got to a point where he could no longer walk because of the incredible pain he felt every time his left leg even touched the ground.


“Even though I had two legs, I could no longer do the simple things we all take for granted like walking, or stretching, or even tapping my foot to music. I couldn’t do any of it without immediately being blinded by the pain that followed. There were so many nights I was woken up because my leg probably twitched in my sleep, or I tried adjusting my position, and that triggered the pain in my hip. Even if I slept well, every morning when I woke up I knew I only had more pain to look forward to.” – Alqab

After a while Alqab gave up on getting out of bed. He would just lie in his room, completely still, for fear that the slightest movement would put him in pain again.


This was the state that 15-year-old Alqab’s life had come to. From being the first student in class every morning, to being afraid of waking up. From staying up late and studying, to not wanting to get out of bed.

It was in late July that Alqab was finally diagnosed with Osteosarcoma. Bone cancer.

On the 1st of August, at the doctor’s recommendation, Amin took his precious son to Delhi. On the 2nd, young Alqab was admitted into a major hospital for his life-threatening Osteosarcoma. Targeted treatment to manage his pain and symptoms began on the same day. On 27th August, Amin had to bring his son home.

“What could I do? I needed 6 more lakhs to save his life. But I’m a poor man, with a poor man’s job in a shoe factory. I couldn’t afford to keep him there anymore. The most I was able to do for him  was to buy him 25 days... 25 days of freedom from his pain. Now he's back home, suffering from that same pain. The only difference is that now we know it’ll keep getting worse. And that, one day… one day my son will die," – Amin, breaking into tears

Alqab’s life can be saved. He does not have to die. Amin and Asma do not have to lose their son. All Alqab needs to do is go back to that hospital and start his treatment. But this family has almost given up hope because of their financial problems. Young Alqab now looks up to you to save his life.  He is counting on you to help him recover in time to attempt the IIT exams next year. 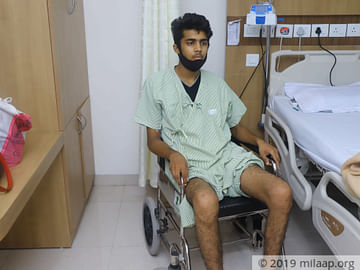 Without urgent and adequate treatment, he may not have long to live