He Turns 4 In Ten Days But Cancer May Not Allow Him To Live Until Then | Milaap
loans added to your basket
Total : 0
Pay Now

You are sending a message to
Biswanath Dutta
Go back

Shares
Shares
Share on whatsapp
Tumpa and Biswanath are waiting at the hospital for the doctor to put another injection to their 3-year old son - Adriz.  Apart from the trauma they have to undergo seeing Adriz shout in pain after every session, they are already stressed about how to gather funds for his next chemotherapy session.

"He is so young to understand what cancer is. At this age, he only has painful memories. His birthday is in the next 10 days but he will be spending his birthday in the cancer ward, I think. That's just so...so unfair!" - Tumpa, mother.

Ever since Adriz got detected with blood cancer, they have knocked at every door they knew for help. Now they just have nowhere else to go. Biswanath fears that he will even lose his sales job at the private company where he works because Adriz refuses to get his treatment done without them around. Since two months, he has not been able to go to his office because Adriz is very critical.

Months ago, we were discussing which school to put Adriz into and today we are fighting to save his life

A few months back Adriz had very high fever and his parents got really scared when they noticed blood in his stool.  He was losing his appetite and used to stay in his bed all day long. They had to give him medicines to control his vomiting and constipation. The blood test results confirmed their fears and they rushed him to Vellore for treatment. They started the treatment there but could not complete as they had exhausted all the money they had. They had no option but to come back to Kolkata. With some help from their friends and relatives, they are now getting him treated here. But with their dwindling funds they don't know how long they can continue...

He cannot speak much but he can understand now that whenever his parents take him to the hospital. He knows it is going to be very painful for him.


“Everyday I have to force Adriz to take his medicines. He keeps crying because they are so bitter and strong. I used to complain about him being naughty - before. Now, I would give anything to see him happy and running. My son’s condition is worsening in front of my own eyes and I am not able to do anything about it”. - Tumpa.

“Every time I promise him that I will get him his remote-controlled red car if he takes his medicines but how do I tell him that I am even running out of money to put food on my family’s plate?” - Biswanath, father

The parents are worried - cancer is spreading rapidly in Adriz's body

“He is our only child. We have not slept since days because after every report the doctors keep extending his course of treatment. We know the cancer is rapidly spreading and it can even take his life away. We are living in a constant fear - afraid that the next 5 minutes will be my son's last."

Biswanath has spent lakhs of rupees on his son's treatment till now. He is running out of funds but Adriz needs the treatment  - that's his only hope at getting cured. A generous contribution from your side can save this boy's life. 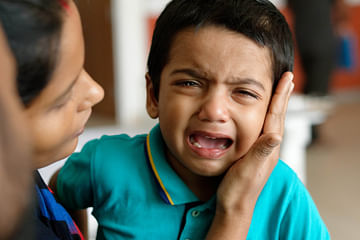 Little Adriz thinks everybody wants to hurt him at the hospital

UPI: givetomlpbiswanath@yesbankltd (Copy to clipboard)
Or
Click here to read the instructions before you make a bank transfer.