3-year-old Arohi Has Only One Kidney And It Has A Tumor On It: Help Her Survive | Milaap
loans added to your basket
Total : 0
Pay Now

You are sending a message to
Ravindra Dabiru
Go back

3-year-old Arohi Has Only One Kidney And It Has A Tumor On It: Help Her Survive

“Currently, my child has only one kidney, that too affected by a tumor. She underwent almost 25 cycles of chemotherapy until April 2017. The doctors had once asked us to take Arohi, either to Bombay or Delhi, but we could not afford”, said Magna.

Arohi is just 3-years-old. She is fighting an aggressive and ruthless form of cancer that seemed to have manifested suddenly. Her family has taken her to several hospitals, finally landing up at Manipal Hospital, Jaipur, where she is fighting this deadly disease.

Her symptoms of weakness was actually signs of cancer

Rajneesh and Magna got married 10 years ago. They were soon gifted with Aditya and later with Arohi. The kids were their bundle of joy. They felt to be complete. They were a happy family until Arohi was diagnosed with cancer.

Within 3 months of Arohi’s birth, she started showing symptoms of weakness. She was very fragile and prone to cold. And this kid also had a tendency of prolonged crying as well. “ I had to manage both the kids and would get really irritated at times. But never did we imagine that Arohi was suffering from a life-threatening disease”, says the mother.

The emotional roller coaster the family is undergoing

When Arohi was 7 months old, the scared parents took the child to Fortis hospital where Arohi underwent CT Scan. When the reports came, the parents were devastated to hear that her kidneys are not functioning properly.

“After diagnosis, the doctors confirmed that she was suffering from Wilm's tumor. We did not know what that meant but what we could understand from the doctor that there was some disease in both her kidneys, which had to be treated at the earliest. I could not be strong anymore. I could not control my emotions”, says Rajneesh.

The family could not afford to undergo the treatment and brought her back home. However, Aarohi’s health deteriorated tremendously and had to get her admitted again. In 2015, she was undergoing treatment at Bhagwan Mahavir Cancer Hospital for 2 long years. Her health conditions worsened greatly and the doctors had no option than to remove one of her kidneys.

We have to make excuses to get her hair cut

Arohi underwent chemotherapy and we thought she was getting better but things turned upside down when we were informed that she had a relapse. The thought of Arohi undergoing the entire process of treatment is shattering the parents.

Arohi does not know about anything till now. The parents understand her pain and trying all ways to reduce her pain.

“When we have to make up stories that why her hair is being chopped off, I break down every time”.

She is an active child and will play with her brother and her friends whenever she is at home. But each time after the chemo sessions, Arohi becomes extremely weak since she gets a lot of side effects.

On 30th October, Arohi was admitted to Manipal Hospital, Jaipur. The doctors said that Autologous stem cell transplant is the only cure.

“Although my child has to undergo three more chemo cycles, I am scared. But what else could I ask for when I know that this is her only treatment followed by a transplant, scheduled end of this year”, says the weeping mother.

Rajneesh father works in a private company and earns 10000 monthly, while Magna takes care of the family. The parents have been trying hard to arrange money for Arohi’s treatment. In the last couple of years, they have spent almost 10 lakhs and now needs our support for us.

Your contribution can save young Arohi and help her to live.

The The specifics of this case have been verified by the medical team at the concerned hospital. For any clarification on the treatment or associated costs, contact the campaign organizer or the medical team. 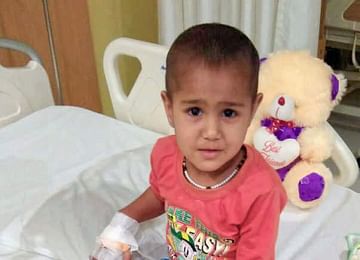 She has only one kidney and it is affected by cancer. You can help her survive.