3 Days And These Parents Have Only 1 Way To Save Their Son From A Failing Heart | Milaap
loans added to your basket
Total : 0
Pay Now

“He tried to take his first step last week, but he fell down even before he could. Can you see his tiny feet now? They are so blue, like there’s zero oxygen in his body at all. His lips are almost black. He doesn’t look like any other baby around us in the hospital. He’s critical.” – Sadhana, mother

Sadhana’s worry is valid. There is no oxygen in Aarav’s body, just 50%. His heart disease can kill and he has gone far too long without surgery. Yesterday, Rishi and Sadhana were told that he has just 3 days left.

Is my baby dying because of me?

Rishi can’t help but wonder if he’s the reason why baby Aarav is this sick now. But what could he have done? When Rishi and Sadhana were told that Aarav has a heart disease, they did everything they could to afford his medicines. They thought that in a few weeks, they can even afford the surgery he needed.


“But weeks turned into months, and I still had no way to afford the 6 lakhs needed. I borrowed from everyone, I did my best. He was 7-months-old when we found out, and now he’s 1. In these few months he has gotten so sick that he can’t even feed without getting breathless and sweating. It’s all because of me.” - Rishi, father

Now Rishi and Sadhana have 3 days to save baby Aarav. If they can afford the surgery in the next 3 days, Aarav will not be in pain anymore.

2 months ago he said his first words, now he only cries

The one thing that these parents long for their child is that he has a pain-free, happy childhood. They long to see him play with his older sister, run around, grow healthy. Unfortunately, all of this is a distant dream without the surgery.


“Avni loves spending time with him. Even at home, all she wanted was to play with him, but Aarav couldn’t. He said his first-word ‘mumma’ two months ago. Now he does nothing but cries.”

Rishi works for a private company and earns Rs. 17,000 per month. But in such a short amount of time, his savings and borrowings are just not enough.

You can see how sick baby Aarav is. He’s running out of time. Right now, he is in the hospital crying because he doesn’t know why every few minutes he gets breathless. Aarav needs your help today. 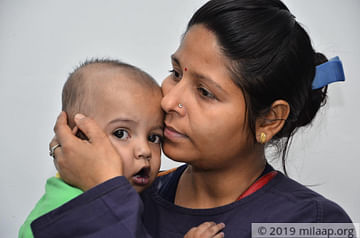 Aarav needs a heart surgery at the earliest to survive. He's running out of time.