Happy she can work even when the power goes out | Milaap

Happy she can work even when the power goes out

Shares
Shares
Share on whatsapp
By 7 a.m., the streets of Dakshin Barasat, West Bengal, were already crowded with people going about their daily business. Their umbrella's, which are normally used to block the rain, were now being used to create some shade against the scorching sun. Everyone seemed to be missing the torrential clouds and rains that normally helped block the sun and cool the temperature down. Still, the weather during the monsoon season in India is so unpredictable, that no one would be surprised if it started pouring out of nowhere. I reached the local branch of DCBS, our field partner, in Dakshin Barasat, and gladly welcomed the shade of the office and the smiles on the faces of the loan officers who were going to take me into the field today. Today, I was assigned to follow DCBS loan officer, Suparna. Her first question for me was if I was able to drive a motorcycle (which I have never done in my life). Due to my lack of experience and courage, we decided that we would ride bicycles to go meet with borrowers. Riding the bicycles proved to be just as tricky for me because the continuous traffic from other cycles, auto-rickshaws, bikes, cars, trucks and people coming from all directions was slightly overwhelming.Luckily, the journey ended smoothly, and we reached the residence of Aparna Sardar without any problems. After a little rest, Suparna proceeded with her official loan business, and discussed the particulars of the loans with the ladies of the group. After all that was taken care of, we started chatting about the solar lanterns and their effects on the lives of these women and their families.The women of the group, named Sanchaiyta, all have their own small businesses that they run with the support of their husbands and families.  Most of the women have their own 'beedi' rolling businesses, where they can produce hundreds of beedis a day. Beedi's are small, thin cigarettes that are filled with tobacco and then hand rolled in a 'tendu' leaf. They are extremely popular throughout India due to the fact that they are quite inexpensive and nice (to the locals).Aparna told us that before, when the current went out, it was extremely difficult to get any work done, and the production of beedis would come to a halt. Now, she says, it is much easier to continue working due to the simplicity of the solar lanterns. She also told us that many of the women in the group are able to produce much more of the beedi product, and this will most likely increase their sales.Before, most of the women had to light kerosene lanterns, which often emitted a pungent smell and stained the ceilings with black smoke. They also mentioned that they did not feel that their children were safe during power cuts. Often, the kerosene lanterns would be placed on the ground and the ladies worried that one of the young ones would run and accidentally knock a lamp over.Aparna told me that besides making their work much easier, the solar lanterns had many other benefits. Everyday tasks were much easier to accomplish due to the ease and portability of the solar lanterns. She and the rest of the ladies in the group Sanchaiyta were very happy with the product and expressed their gratitude repeatedly for the help they received from lenders like you. 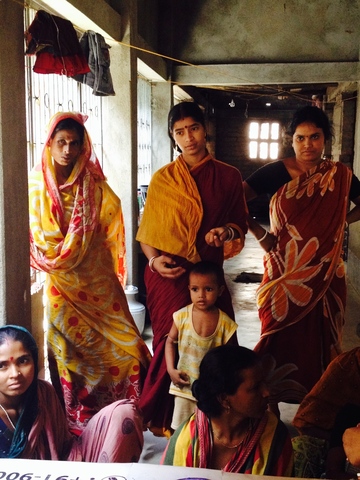